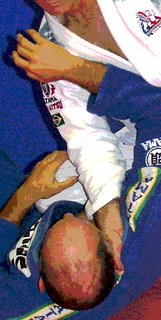 There is merit in being unorthodox. The most obvious reason is the tactical advantage it gives us over the greater training population. The technqiues that pop up most frequently on the mat are the ones that everyone learns to counter most quickly. Those techniques that only pop up occasionlly, are not seen regularly enough for organic counters to spread and thrive. Hence - the southpaw advantage. So far - so obvious ..

Consider this though .. this is how the evolutionary process is driven. )hope I don't offend too many here) But it goes like this: Over time, loads of new animals are born - and loads of genetic freaks are included in these new populations. every now and then, one of these 'freakish traits' just happens to have to give the animal an edge over the rest of the population for some reason (maybe thicker fur - and winter is coming on). Sio this animal tends to mate with another, or for whatever reason, this 'freakish trait' is passed on - and so that 'new and variant species' now lives where others die out. And so, evolution ..

Same goes for the mat. BJJ is driven by Darwinian forces - new and 'freakish' techniques are thought up, or accidentally discovered, they 'work' and so we continue to use them, until they are usurped by other techniques.

I encourage the development of individual 'speciality' moves after blue belt level to help give rise to this process. it's good for the mat - the local 'species' become innoculated to the 'new technique' (develop the counter) and so the process goes.