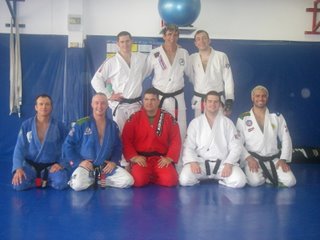 Sitting here with Rigan and Geoff Aitken the morning after the big weekend - digesting the crepes that my wife has cooked up for all of us. A relaxing day ahead of us - a bit of training just before lunch, then maybe catch a movie before heading to the school late this afternoon.

Yesterday was a huge success - we ran two seminars at Dominance Jiu Jitsu academy in melbourne which were both packed. Everyone enjoyed the great material we covered during both of the two hour sessions. It was fantastic to see the hardcore BJJ afficionadoes come together from the country over (as well as new Zealand) - for a really fun day. What a weekend!

The feedback I have had so far has all been positive - with most people saying they thought it was the most smoothly run comp they had ever been to. And with the added special action of all the brown and black belt matches - as well as the two new black belts being awarded - made it a day to remember.

For myself, this week will now drop back into a pretty normal routine. Private classes in the morning - some time off in the afternoons - then classes in the evenings. The big difference of course, being that Rigan will be there with me in all the classes. Bonus for everyone!

On Saturday, I am shipping Rigan off to Perth so he can conduct some seminars at good friend, Adam Metcalf's school, followed by another at Troy Flugges Sub factory the day after. Then he'll come back to Melbourne for another week.

That weekend will be my weekend off with my family - who havn't spent much time alone with me of late. I am looking forward to it.

Anyways - time to get the big guy on the mat. here's a pic of some of our Aussie Black Belts with Rigan after yesterdays sessions - I'll get back with some pics over the next day or two.
Safe training all,
JBW
Email Post