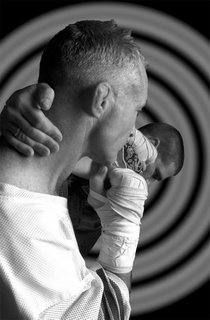 Drunks don’t leg-check
Here's the thing
most martial arts systems are driven by Darwinian forces that exist only within their own walls. That simply means that they are basically evolving to fight themselves.
Hey that guys winding his hip up, he’s throwing a round kick, I better leg-check. Yes, perhaps you better. But also realise that by doing so, you are developing responses that may or may not necessarily be the best responses for realworld, no rules encounters.
You throw your own round kick and your sparring partner stops what he's doing and checks. It’s good for him to do that, so he doesn't have to take the brunt and force of continual round kicks on his unprotected thigh. But DO NOT think that this is the response you are going to get from the drunk guy. The drunk guy is not going to RESPECT your round kick, put his plans on hold and leg-check. He is simply going to smash you in the face; probably right in the middle of your kick. He will also not react to fakes; he will not keep his distance, he may not even register the fact that you are hitting him. Drunks don’t leg check; they don’t counter your triangle choke, they don’t try to pass your guard. Drunks don’t leg check; so make sure you that some good portion of your training is preparing you for how people ACTUALLY fight you in the real world, as opposed to how your sparring partners fight you in your school.
Train smart, train safe.