The ferryman must be paid ... 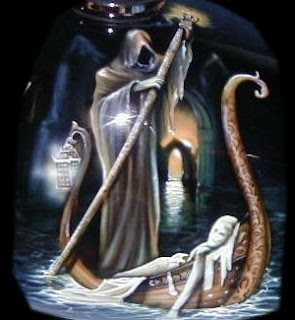 Training in BJJ requires that you pay a price.
By this I mean that at some time or other, you are going to have to embrace the concept of 'losing' or 'doing it tough'. Some pay it early in their training, some pay it later, some pay less but pay frequently, others pay less fequently but they pay more. However it goes - you WILL PAY. Accepting this fact and understanding that it is a necessary part of the process can make life easier.

The larger stronger students, for example, tend to put of 'paying' for some time. Initially, they dominate the smaller, lighter students and don't find the training to be too 'difficult' at all. The problem is though, later one, as those smaller and weaker students become more technical, they may find they are asked to pay a huge price when the tables turn and they find themselves on their backs and experiencing positions they have never spent much time in. This can be a very frustrating time for the 'big guys'.
Conversely, the smaller students, are always finding themselves 'being squashed' and on the 'defence'. From 'day one' they are underneath and being dominated by the larger half of the class. They pay constantly from the very outset. The good news though, is that the longer they spend on the bottom, the better their Guard Skills and Escape Skills become. Eventually, the tables turn and they begin to rack up a few wins over the bigger guys. And that of course, is when the bigger guys begin to pay.
The deal is, that everyone pays. And it's not a bad thing - in fact it's a good thing - it's how we develop 'immunity'. We get a small dose of the chicken pox - we pay a price, for sure, but we develop the antibodies that allow us to prevail over future infections. We all need to pay.
If your in the middle of the class - not the smallest, not the biggest, sometimes you pay, other times you don't . It all works out in the end. Payment is required - but payment can be fun too!