And that about wraps another day ... 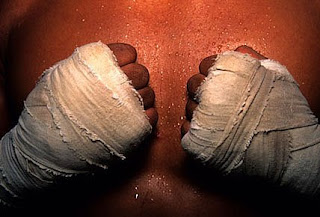 Training this morning was a load of fun. Five rounds of sparring with Rachasak - a former dual-stadium champion with over 300 professional fights under his belt. VERY, VERY good. Beautiful in the clinch - and exraordinarily difficult to lay a shin on. Afterward, I spent some more time with another younger fighter - working on some defence and 'lead leg' work. There was just the three of us in the ring - as everyone else was sleeping due to a big previous night - it was the Kings Birthday here in Thailand - and everyone went out to watch the King's Cup (Huge Muay Thai event) - and I suspect most of them were sleeping off hangovers. So the gym was very quiet - I enjoyed it a lot.
I then headed down to Chatuchak market and bought a couple of things for my family. The to a movie - Quantum of Solace (English soundtrack - Thai subtitles).
After the movie I headed back to my hotel, where I did some considerable work on the proposed new 3rd degree black belt requirements for Chuck Norris's organization (UFAF).
It looks very probable that UFAF will adopt this curriculum as their official syllabus requirements in the future - I feel honoured and humbled that they are looking to my lead on this.
Anyways - time to hit the pool, do a few laps before heading down the street for dinner.
Stay safe,
JBW
Email Post