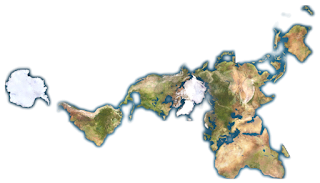 T.H.I.N.K
The thing that’s lacking most in the world, my father used to say, is THINKING. He was a thinker – my dad - that’s for sure. One day, when I was six or seven years old, I arrived home from school to find him having a royal argument with my mother. She was hurling eggs at him, from across the lounge room (they weren’t cooked). The reason for the argument was that while she had been away for a day or two, he had painted a map of the world right around two walls of our lounge room. I thought it was fantastic – there it is – a map of the world, each country a different colour, depicted in spectacular style.
The thing about the world, my dad told me once my mum had run out of eggs and calmed down, it is really just one, big, interconnected place. The map he drew on the wall, strangely, didn’t correspond to the maps I had been shown at school. My dads map, did indeed depict the world as a kind of single-large-island. Instantly, my view of the world changed. But I was still troubled – ‘This isn’t the map my teachers have shown me” I told him – he told me that most people, teachers included, have a very small view of the world – and that one of the most important things I could ever learn to do, was to learn to SEE THE BIG PICTURE. And that was why he had painted the map on the wall – so that my sister and I could SEE THE BIG PICTURE.
This, of course, was a powerful lesson. Seeing the big picture in things, is the first step to a larger understanding of things. Thinking about things from every possible angle, and then some, can lead us to deeper insight.
As it turned out, my dad’s map of the world was based on Buckminster Fuller’s Dymaxion Skymap – shown here. When we cut up a GLOBE in this fashion, unfold it and lay it out on the table, we see things in a slightly different light. The world is indeed, more connected that most people believe – and THINKING about things in new and interesting ways – helps change our views on things and helps us to integrate new ideas.
Train Hard – Train Smart.
JBW

Anonymous said…
hi mr will ... my name is matthew narsh and i am sam elbanna's tkd instructor . i have been a fighter for a long time (i have just turned thirty) and now in my later years i am having trouble turning my engine off ... i have just read your latest books and really enjoyed them ... i'm just asking for addvice. i not taking into account who they might be ie: police, ect.
11:29 pm

JBW said…
Hi Matthew,
your wuestion is an intersting one - and difficult to answer in one short paragraph. But my answer, though short, is this: the more confident we are - truly confident (with confidence built from serious trainign in proven combatibe methds/styles - ie: boxing, BJJ, wrestling, etcx) then the less we need to 'fire up' at the slightest annoyance. The more confident we feel, the less we need to prove ourselves - and the engine, remains in 'idle'. Plus, the more we are really 'doing the business' on the mat, we more we understand, the 'range' that our engine has - from 'idle' through to 'full throttle'.
Sorry - short answer to a big questions
,
best regards,
JBW
3:17 pm