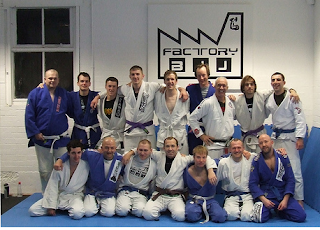 Hit Manchester yesterday - new Cheltenham Blue Belt, Mark Collett, gave me the much appreciated ride up. We called in to Muay Thai legend, Master Sken's school for a cup of tea and a chat before the Manchester maniacs, Adam and Doug came to collect me.
Master Sken is a wonderful man; soft-spoken and gentle, as some of the most accomplished martial artists I know, seem to be. We had a nice talk about Muay Thai, BJJ and where the martial arts are heading before he honored me with some gifts (an unexpected pleasure) - and took a few photo's for his much decorated walls.
Then it was off to Adam's new school. Adam Adshead has done an excellent job these past few weeks in establishing his new premises. His academy is called Factory BJJ - and he is in the process of building a fantastic group of keen BJJ guys there.
Darren Curry (Hauter-Machado brown Belt from the Leeds area) made the big drive over, as did our new friend Danny from Doncaster. We did some in-depth training covering several themes before I was ushered off for a few hours kip. Seven hours later, I find myself at the Manchester airport, waiting for my flight to Heathrow and then onward to Oslo this afternoon. This pace is hectic - no doubt about it. I will be teaching on the other side of Europe this evening - with my friend Kenneth Fjeld doing his always-excellent job of translating.
More to follow.
JBW
Email Post

Anonymous said…
This is the second seminar I have done with you John and it was just as good as the first.
I really enjoy your outlook and your teaching style, its given me plenty to think about.

Enjoy the rest of your travels and i look forward to training with you again.

JBW said…
Thanks very much - glad you enjoyed it. Hope to see you third time - more food for thought.
JBW
3:21 pm