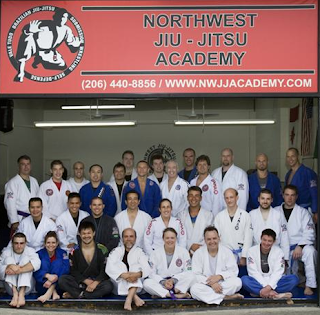 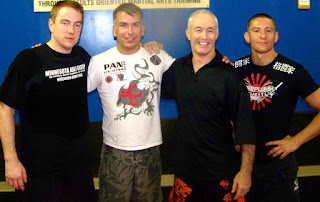 After saying goodbye to my family in vegas, David and I boarded a flight for Seattle. He wasn't feeling well, and was starting to shiver and cough as the flight took off. By the time we landed in Seattle, David was really sick. We were picked up (at midnight) by Black Belt student and good friend Brian Johnson. In my efforts to see David out of the airport, I left one of my bags on the luggage conveyor - the first of several hiccups ...
We installed ourselves at Brian's apartment - and hoped for a better start the next morning.
David deteriorated badly through the night, by next morning he was delirious and lapsing into unconciousness. We had Brian take him to the hospital, where he was treated with an intravenous drip. I then headed out to Kirkland to teach seminar at our friend Korbett's school. See attached pic of Andy Wilson (MKG Martial Arts), Korbett Miller (Millers Martial Arts), myself and Brian Johnson (Northwest BJJ).
After the seminar, we headed back to Brian's partner's house (the lovely Stacy Thrailkill) - where David had to be re-installed. He was still in a delerious state.
Next day, David still bedridden, Brian, Mike (a student of his) and I, headed out early to make the three hour drive up into Canada to run another seminar for Perry Bateson. Our troubles began at the Canadian/USA border. Border Guards asked us to step out of the car and head indoors for a 'short' interview. We were summarily interrogated for over an hour, seriously delaying our trip. Finally, and seemingly reluctantly, they allowed us into Canada.
Twenty minutes into Canada, we ran into some serious traffic problems. People were out of their cars, throwing frisbees - not a good sign. We turned to the faithful GPS, found an alternate route and continued on our merry way. The new route took us to a river crossing that was facilitated by a ferry service - we joined the queue as the twenty odd cars in front of us drove onto the ferry - you may have guessed by now - the car in front of us made it on, but we were stopped. Full ferry!
We finally arrived at Perry's school and hour and a quarter late. Neverthless, after apologies, I ran a three hour seminar that everyone seemed to enjoy. The drive home was easy - and ironically, the border-crossing back into the USA was nothing more than a 'hello' and a friendly smile - easy!
We arrived back at Stacy's place to a home-cooked meal - thanks Stacy!!! We gulped it down while watching UFC 100. A nice end to a long and 'bumpy' day.
This morning, with David slowly on the mend, I headed to Brian's mat. After spending an hour with Brian, Korbett and Andy, I taught a three hour seminar to around 30 of Brian's students. What a great bunch! If you are ever in Seattle, and into BJJ, head to Brian's school. BTW - he is the world no-gi silver medallist - and three-time winner of Grapplers Quest - has not been scored on in his last 14 matches and won all by submission. And that is only a small snapshot of his resume - he is a great competitor - and more importantly to me - a great friend!
Another home-cooked meal tonight, freed me up to do the last minute touch-ups on Chuck Norris's 3rd degree Black Belt Curriculum - a fairly large task. I have just e-mailed the document off for printing in time for next friday's training session in vegas where I will be taking his black belts through the entire program.
Time for some sleep - and a check-up on David. I'm hoping he will be fit for travel back to San Fransisco tomorrow - as was our plan. We may yet have to stay here - not a scary prospect, considering Brian and Stacy's heartwarming hospitality.
Stay well,
JBW
Email Post