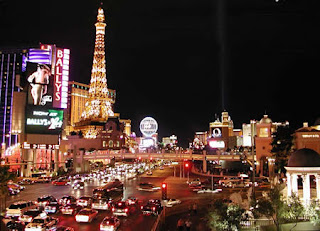 The Las Vegas Martial Arts Supershow has come to an end - and what a crazy three days.
My good friend Dave Meyer and I (along with my wife Melissa and boy Felix) have been up early each day, manning our booth/mat.
A few snippets:

- End of first day, we attended the conventions evening event which featured speaker/motivator Tony Robbins. it was an interesting two hours - for sure. Am glad we did it; although a little too EVANGELICAL for my liking, with the masterful Robbins yelling 'give me a YES' every two minutes and the audience responding with complete delight. The funniest moment of the evening was when Robbins had the 2000 strong audience repeating one of his mantra's - "WE ARE LEADERS - WE WILL NOT FOLLOW!' - which was obviously quite ironic - but the funny part was when my nine year old boy pointed this put by saying - 'Dad, Americans are weird - because they ARE all FOLLOWING!' A dozen people around us hear the comment - but fortunately they were all nice and saw the funny side of it. Personally I hope they got his point - David commented succinctly, saying 'Flawless logic!' and gave Felix a pat on the head. It was a good night though and Robbins did have some interesting things to say before he hit the sales pitch for his next life-changing extravaganza. He is a masterful communicator, very, very good at his job.

- Second day, sleep-deprived and still jetlagged - I manned the booth with the help of David and student Jeff Robison and taught on the mat all day. Many school owners bought my professional MMA Curriculum - so that was nice. I also made a few new friends, like the wonderful Riccardo Liborio, owner of American Top Team and legendary Brazilian Jiu Jitsu coach. I also caught up with some old friends including - Benny the Jet, Fariborz Ahzhak, Tom Callos and many others. There are hundreds of schools throughout the USA that use my BJJ curriculum and so I spent a lot of the day meeting, greeting and posing for snapshots. That evening, I ran a three hour seminar on Designing MMA Drills and Super-coaching Strategies (a huge success) so it wasn't until nearly midnight that I got a chance to sit down for a bite to eat. A long day.

- Third day, more of the same. I was engrossed in teaching on the mat when suddenly something heavy and Brazilian leap't onto my back. After dislodging my stealthy opponent and engaging him, I realized it was my long time friend Renzo Gracie. I first met him back in Brazil in '87, when Rigan and Jean Jacques Machado were co-owners of Gracie Barra. it was so nice to catch up with him for a bit - he is a wonderful guy and a great ambassador for Jiu Jitsu. He invited me out to teach some classes at his academy in New York - one of the most successful schools in America. I must do that someday; I really like Renzo! Finally, the show came to an end. SO farewells were made and I headed out to dinner with family and a couple of friends. Tomorrow, sadly, Melissa and Felix head back to LA and onward to Melbourne, while I head north to Seattle and Vancouver for more seminars before coming back to Vegas next week to take all of Chuck Norris's Black Belts through their new 3rd degree black belt syllabus.

Time to get some sleep - and catch up on some e-mails. Stay well all - back for more soon.
JBW
Email Post

BlakeG2560 said…
"WE ARE LEADERS - WE WILL NOT FOLLOW!' - 'Dad, Americans are weird - because they ARE all FOLLOWING!'

John, Your son rocks.Reading this made my day
4:20 pm

Chris H. said…
John (& Dave),
I just wanted to publicly thank you both for the coaching workshop you conducted in Vegas. It was one of the best workshops I have ever been to. I thouroughly enjoyed the way you broke down the methodology of how & why you structured the curriculum & teach it. Incredibly valuable information for instructors regardless of style. I am looking forward to training with you both again soon & as often as possible!
With much respect & gratitude,
Chris Herrman
Alpha Martial Arts
Seattle, WA, USA
1:48 am