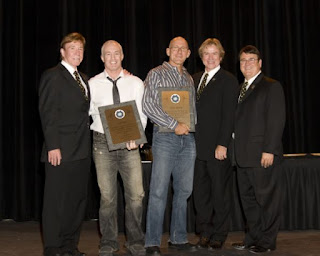 I was recently engaged by Chuck Norris to design the third degree black belt curriculum for his UFAF organization. The work consisted of creating a technical manual and a series of IPOD movie files to accompany it. Basically it was constructed as an MMA syallabus and is now know as the ISDT curriculum. A couple fo fridays ago, I spent the day delivering the new material to several hundred UFAF Black Belts in vegas - the evening after, there was a huge banquet dinner where a few people received acknowledgment for their contribution to the UFAf case - Dave Meyer and I included. A couple of other good friends of mine, Australia's Richard Norton and the UK's geoff Thompson have also made significant contributions to Chuck's organization - a pity they couldn't be there this year also! The pic showcases Chuck, myself, dressed nicely you will notice, Dave, Aaron Norris and Ken Gallagher. I may not have my best jeans on - but I am at least wearing a tie ... that has to count for something!
JBW
Email Post