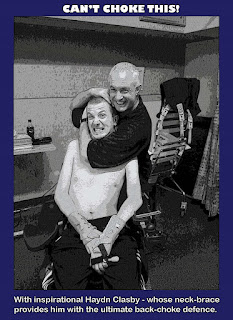 I had the opportunity two days ago, to head out to the spinal unit in Auckland, and visit with Haydn Clasby. For those who don’t know, Haydn suffered the most serious accident to have ever occurred (as far as we know) in the practice of BJJ. Without going into detail, his injury has left him wheelchair-bound, with little to no sensation below his chest-line.
Haydn, I have to say, is an inspirational individual. I cannot fail to be astounded by the stuff this man is made of – to describe his outlook as positive, would be doing him a disservice. He is a man with a mission!
In a way, it is almost like Haydn has just been born into his second life. He is consumed by a need to gobble up any information that will help him live and thrive in the new world that is his life. He has learned crucial things, as all newborns do; things like how to swallow or cough or effect a turn of the head. His mission right now is to learn how to BE and DO in a new environment and in a new body.
It is my firm belief that people with a mission, are among the happiest and most fulfilled people on the planet. Happiness is not about wealth, not about what you have – and apparently, not about whether you can walk or not; happiness has got little to do with these things and much, apparently, with things like having and achieving small goals that are personally meaningful to us. Right now, Haydn’s short-term goals are to do with things like raising his arm to scratch his forehead or shooing away a fly; ultimately, he wants to be able to get from his wheelchair to his bed, unassisted – these are the big goals that fill Haydn’s world. In the long-term, he has hinted at wanting to get out there and inspire and help people who have suffered similar misfortunes – although I hesitate to label this particular accident as a misfortune, because despite what we may think, Haydn himself comes across as an individual inspired and driven with a sense of deep purpose. I predict he will help many people, and that the world will be a far better place for having him in it.
On a personal note, I would love to see Haydn write a book or make a documentary on his courageous and inspiring journey. I for one am in awe of his sense of self and the grace that pours forth from him. Haydn is one of the most remarkable people I have ever had the privilege of meeting. For anyone wanting to make a small donation to the fund that his friends have set up – please CLICK HERE
Inspired and full of awe …
JBW
Email Post

Andrew said…
John, I am extremely impressed with both Haydn's attitude and your making the effort to visit him. I made a modest donation to the fund when the news first came out.
1:36 pm

JBW said…
Hi Andrew
thank you very much for your donation - it all helps Haydn and his family a lot - and is much appreciated! Good man!
JBW
1:38 pm