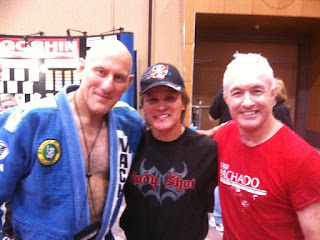 Leaving Vegas today - thank goodness. This place can suck the life out of you.
heading north to a way more healthy place - Seattle, to teach at Brian Johnson's school (one of the best and nicest grapplers in the USA) and Korbett Mlllers school (Korbett runs one of the best MMA schools in the country) and then up to Vancouver for a night to teach for my friend Perry Bateson, who was down again for the expo in Vegas.
I'll be back here on Sunday night -and then I'll be getting in a car and heading off the grid for four days before coming back for a third time to teach for Chuck Norris. Then it'll be on a plane and back home.
One of my black belts and now legendary UFC star, George Sotiropoulos came by to say hello a few days ago. He is just wading through the opposition in the UFC right now and shows no signs of slowing down - one of the truly professional all-rounders in the competition. He has just bought a house in the beautiful Washington State, where he and his lovely wife now live. Life is going well for the Geelong-born george - because he has stood up and made it happen. I am very proud of his efforts, the way he conducts himself and his well-balanced outlook on life. Go George.
I also spent some time with Benny the Jet Urquidez - who is still hugely active in martial arts training. legends, simply, do not stop! What an amazing martial artist and what a contribution he has made to the martial arts landscape.
Gotta run - planes to catch.
JBW
Email Post

David Roman said…
The SuperShow is always a good time for training but Vegas does wear on you rather quickly.
5:59 am