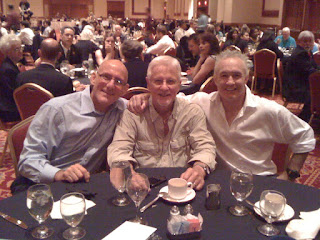 It's late here in vegas - I just returned to my room from the United Fighting Arts federation formal dinner. It was great to catch up with Chuck, Gina and Aaron Norris again. The Norris's are grounded, generous and humble people - one cannot help but like them. David Meyer and I were again honoured with an award for our contribution to the further development of the UFAF system - and we have been asked to return again next year and teach the Black Belts again; will do!
It was also very nice to catch up with many other UFAF friends: Chip Wright (7 times USA Karate Champion), Kenneth Fjeld from Norway, many of our UFAF bJJ blue belts, and a host of other esteemed martial artists. Here's a pic of myself, with David Meyer, and old friend Dick Treanor just before we were called up to receive our awards. Time to sleep- will visit with a few friends in the morning before flying back to Los Angeles and getting on the midnight flight back home.
Best respect
JBW
Email Post

Dunamis Karate said…
I am looking forward to having you gentlemen join us at the UFAF ITC again next year.

Every year I attend your seminars at the UFAF event in Vegas and each time I am amazed at how well you share your information with us. You have truly developed a systematic science to your teaching making it simple to grasp and retain the information ... even for us stand up karate people! :~)