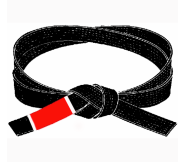 I am often asked what it takes to be a BJJ Black Belt? My guess is that people see the BJJ Black Belt as an iconic martial arts achievement – worthy of serious respect and admiration. When I am asked this question, I am sure that most are enquiring largely about the physical and technical requirements – but for me, this is only a part of the puzzle ….
For me, the complete answer to this question is not a simple one – but one thing is certain; a Black Belt in BJJ, or any system for that matter, is not, in and of itself, something that should automatically engender respect or admiration. I have known Black Belts who are rude, obnoxious, ego-driven people; who in my opinion do not deserve anywhere near the amount of respect they themselves think they deserve. On the flip side, I know many white belts who are courteous, thoughtful, respectful and considerate of others. A belt shouldn’t engender respect or admiration – that is a misguided concept; ultimately, it is the person wearing the belt that earns or fails to earn, respect and admiration.
As Rigan Machado re-iterated to me yesterday – the Machado credo is simple: “Leave your ego at the door.”
From my perspective, the Black Belt should be a mark, not only of physical prowess and understanding but of good character and good standing in the community. Martial art training, and in my view BJJ training in particular, should engender a well-rounded, wholesome and fulfilling lifestyle; as well as a fundamental respect for other people. The archetypal warrior, has at his core, a desire to serve and protect; a credo that is born out of his respect for others.
Personally, and in the simplest of terms, I think a Black Belt should leave the world a better place for having had he or she living in it. In a ideal scenario, a Black Belt should be the complete package. A Black Belt should be someone who sets a higher standard – in all things. In short, a Black Belt should be personify a standard of excellence.
JBW
Email Post

Anonymous said…
I have never coveted a Black Belt in my martial arts training, only the knowledge, skill and growth acquired along the way.

A Black Belt by your definition, as a recognition of well rounded wholeness and not just a skill set, seems a far more worthy goal and one which I will be pursuing 5% at a time.

Thanks for another inspiring blog.

JBW said…
Thanks Simon.
Sometimes the physical skill-set comes first - sometimes, the life-skills ... we don't all learn the same things in the same order. Some paths have dead ends - others go on a little or a lot further - in the end, the goal is to become a more well-rounded, fulfilled and happier person. And perhaps equally importantly, be able to guide others toward the same thing.
best wishes
JBW
4:32 pm

Anonymous said…
When I think about my BJJ journey - the at times feeling of going one step forward and two steps back, I often remember the comments made by my father the first time I told him that something was hard. He simply said, "nothing worth having or achieving is free or easy.."

The things we do easily or get free are seldom valued - hence why I think the BJJ black belt is held in high regard - its aint free or easy.
Regards

Anonymous said…
Excellent post! & I'm a fan of your blog as well, and appreciate your insights and tips.