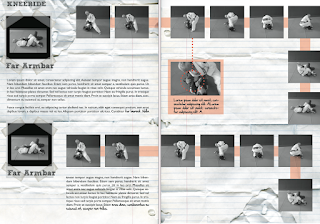 Another day - another 2500 pics!
My friend Marc Hebert is out from South Africa - and the last few days have seen him behind the camera taking several thousand still shots and getting a stack of video in the can. Being a digital media whizz, he has, after a hard night, nearly completed the authoring of a new DVD on Mastering Sweeps. This is the third in the series (the first two being Mastering Chokes and Mastering Armbars) and is nearly ready to be shipped off for replication. I have the 2500 pics on my hard drive, so I have everything I need to put together another Jiu Jitsu book sometime over the next six months. The title of the book will be Understanding BJJ - and will be an in-depth look at how to go about building a personal game.
I am messing around with the 'look' and 'feel' of the layout, and need to get that squared away before I put my head down and get to work on it. The featured pic here is my attempt at building a 'notebook-style' look - and comments would be appreciated. It wil be a large book - several hundred pages - and it will be very detailed.
I have been thinking about this book for some time now - but I couldn't do much more than think about it until I had the pics on my hard-drive. Not having the bits and pieces i need on hand was what was stopping thoughts and mild musings from becoming reality. I know this sounds obvious - but so very often, we can't move forward because we can't be bothered or are unwilling to take the steps that commit us to action. Taking the steps that commit us to things, is a real secret to transforming daydreams into reality. HAve a great Christmas everyone - I'll get another post up before the weekend.
Best wishes
JBW
Email Post

Unknown said…
I hate that font, it would be very hard to read a book full.

There are some people who study this in huge depth but I find you can't go wrong with Arial.
2:55 pm

Hoops said…
This comment has been removed by a blog administrator.
3:08 pm

Hoops said…
I was going to say the same thing as Brendan. I hate trying to read anything apart from plan clear text.

JBW said…
Thanks Brendan - I appreciate the comment, and agree. I'll probably use Gil Sans for the main body of text - and the handwriting font for the odd note. Thanks again
JBW
3:10 pm

fenix said…
I'm over the moon to hear you have another book in the making. Can't wait!

I agree on a simple font for legibility.

For readability, short paragraphs are best. Where there is a series of photos, I find descriptions easier to follow if the explanations are near the photos they relate to. So instead of one long paragraph describing the whole technique, maybe split the text into chunks.

I find that if I read a long paragraph which is illustrated with photos, that I look at the photo and then, to resume my reading, I have to scan back through most of the text. That's why I prefer photos within text or text chunks next to photos.

In addition to a coloured track indicating the photo sequence (or instead of?), I would love to see little numbers in or next to the photos.

Andrew said…
Looks great - maybe space for the student to make their own notes next to the technique? I always find this handy.
Plus, a large page format (ring bound) would be great for using it as a reference on the mat itself.

JBW said…
Thanks Chris - thanks Andrew good suggestions. I was pondering on the idea of making a little space on each page for note-taking ... nice.
Cheers.
JBW
2:46 pm

Thomas said…
Ditto on the font ;)
In my opinion, Saulo's "Jiu Jitsu University" is the gold standard for content and breakdown, while the "Guard" series by Beneville and Moreira are for overall layout - here are a few samples to get a feeling for it:

In the "Guard" books, blue is tori and white is uke; mistakes and potential problems are marked up with a black background - see http://www.grapplingarts.net/PDF/vol3/ch%204inverted%20half%20guard.pdf for an example.

Between Ribeiro and Beneville, I think they have addressed all of the issues that plagued early BJJ books - though admittedly, the "Guard" book layout may seem overwhelming at first glance.

(I'm not on Victorybelt or Grapplingarts commission and first in line for your books!)
11:58 pm

Gerry said…
Exciting to hear John, everything I had to suggest has been mentioned initially except to say that I think it is a good idea to have the images flow in the same direction or pattern on each page. I have seen books where the images go in different patterns round the pages in different chapters and that can be confusing.