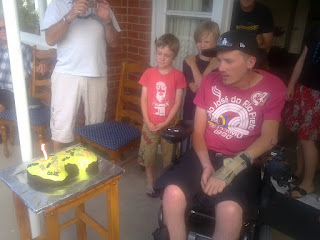 Reminder:
On the 12th of the 12th 2009 at 12.08pm with 5 seconds on the clock Haydn Clasby received an injury that changed everything about himself and my club. Hayden broke his neck and is now paralysed from the nipple line down. This was the first injury that anyone had heard of this kind and it rocked the BJJ world. People from all over the world sent messages of support, gave money and offered things. It was amazing to watch. On that day I lost my favourite training Buddy, I lost the ability to look at people rolling and not cringe when some one is in guard. I lost the ability to roll for a very long time. It changed everything. What I did find on that day was a Man that has the most incredible strength. In all my life I have never met any one that inspires me the way he does. Here was a guy that had been told one of the worst things you could be told. Haydn amazed us all with his strength of character his ability to still laugh and his willingness to never give up. To make light of the situation and to keep moving forward. Today I am heading to Haydn’s house to celebrate the fact that 1 year ago today he could of died but he didn’t! It is a bitter sweet celebration and I sit here and write this with tears in my eyes for all that was lost and for all that was gained from one moment in time that can never be taken back. Haydn you are a legend! - Melodie McDonald

Haydn is doing really well and is settled in his new house with partner Gen and new dog (cavalier/pug) Gus. Renovations have been finished and now he has a flash new bathroom and lift to get to his home gym.

Haydns biceps muscles continue to get stronger, as yet he doesn’t have triceps or wrist extensions, it amazes me what he can do with just biceps. His left arm is considerably stronger than his right but in the last two months that has gone from strength to strength.

He has been looking at the possibility of Stem Cell treatment but that will be quite a few years away if he decides to do it as there is still a lot of experimenting with it at this stage.

2012 will see Haydn moving to Christchurch for a few months, to have an operation on his arms to move muscles around so that he can get wrist extensions, which will allow him to pick stuff up.. Hopefully the MMA/BJJ community will step in and head a long to the hospital and meet Haydn so that he will have a steady stream of visitors. He will pretty much be a “nigel no mates” down there! He is a pretty funny guy and am sure you will have a laugh with him.

Haydn has a long term plan of joining the Wheel Blacks and playing wheel chair rugby! He regularly goes to their games.

This is a pic of Haydn at his “1 year since I nearly died party” with his 1 year anniversary cake taken last Saturday!

All the best HAydn - you inspire us all.
JBW
Email Post

Will said…
Wow... That is both a sad and inspirational story.

Sometimes we all take so many things for granted, these stories remind us to be grateful for everything that we have.
3:13 pm

Anonymous said…
May your recovery continue and stay strong. Love and prayers from the USA
4:43 pm

JBW said…
For anyone who has met Haydn - it becomes abundantly clear that he is an extraordinary person. There is no doubt at all - this world is a far better place for having Haydn in it - he is an inspiration and has so much to offer. if you get the chance to chat with him, even for a few minutes, my advice is simple - do not pass up the opportunity.
Best wishes
JBW
3:40 pm