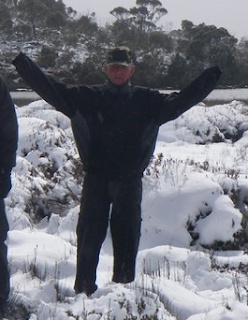 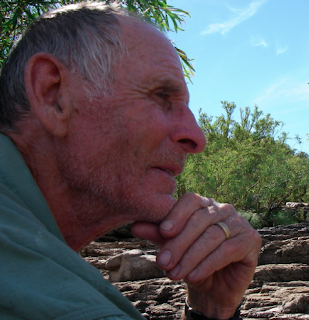 For those who have read my books, you may be familiar with the name 'Ron O'brien' - Ron has been a friend of mine for some 35 years. He accompanied my on many adventures, To Brazil in the late 80's for BJJ training, in Indonesia well before that, In India, Mongolia as well as countless hiking trips into the wilds. Last weekend we went on another hike, this time into the remote regions of the central plateau in Tasmania. The weather started out allright, but by the third day we were three foot deep in snow. The walk out was very hard for him, despite my carrying his load and taking frequent rests. Luckily my friend Craig was there to lend moral support. We made it out, and after good serving of chocolate pudding on the ferry trip back home, Ron seemed to have recovered quite well. As it turned out though, my great friend of three and a half decades and stalwart partner in many an adventure, had taken his last trip. Two days ago, his heart gave out -and after several serious attacks, he passed away late last night. Ron was a man who lived his life on his own terms, he pushed the envelope in every respect - he extracted more juice from life than anyone else I have ever know. He poured wisdom, he exuded love, he was the most truly vital person I have ever met. Always - he was all in! I shall miss him dearly.
JBW
Email Post

David Meyer said…
Ron was a delightful person and I enjoyed every time I ever met him. I know no one will miss him more than you, and you were a great friend and made it possible for him to do so many things that enriched his life. He will be an inspiration to all who knew him.
11:42 am

Dick Treanor said…
Happy to knowledge his full life. We all should be so full of life and spirit. Although I never met him, you spoke of him often when describing his trips and adventures with you. I always admired his zest for life and pushing of the envelope, even more admirable at his age.
I am sorry for those he left behind, perhaps you most of all. He was a true friend and companion.
Dick T
12:18 pm

Dr Geoff - Reflections of a Informationaholic said…
A truly great man, who sucked every ounce of life out of every moment he spent here with us. He will be remembered dearly by all those who knew him.
My deepest condolences to John for his loss.
Geoff A
6:53 pm

JAB said…
RIP
Condolences John for his family. Sounds like a great man, and more importantly a wonderful friend.

Our hearts and prayers from Seattle.
Jake
3:02 am

Anonymous said…
John. Our sincere condolences. From recounting stories of your many fishing trips with Ron you were closer than brothers! You'll have many fond memories of him to help ease your pain. Thinking of you at this time. From Tony, Mark and all of us at FFMA in Cheltenham our thoughts are with you. Roger
8:23 am

Anonymous said…
Really sorry to hear that John. remember you talking about him on your last trip and talking about taking that trip to Tasmania. Glad you got to share that one last adventure.

Paul Meek said…
Sir I just this day finished reading your last book and was thinking "what is one of the key messages for me", it was the metaphor behind heading much further up the stream to catch the big fish, I believe Ron was with you on that first big catch ... belated as it may be now, how wierd it is to have just read your eulogy to Ron with these thoughts ripe in my mind.
He was a lucky man.
5:44 pm