Learning Techniques VS Developing a Plan. 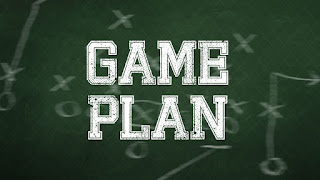 When we start out in BJJ, we begin a journey of collecting techniques. With enough of them under our belt, we eventually become Blue Belts. Tis begs the question: where to from there? Is a Purple belt just a blue belt with more techniques in his collection - or is he/she something more?
In my view, the approach to purple is very different from the approach to blue. For me, this part of the evolution marks the transtiion from learning techniques, to developing plans. In an ideal world, the purple belt doesn't just have (for example) a 1/2 guard technique - he/she has instead, a 1/2 gard plan; a passing plan, a side control defence plan, a turtle plan, etc. This takes time and experience and that's why it is usually around purple belt level that we start to formulate a large enough series of plans that we tend to 'FLOW' from one to the next as the fight evolves and changes.
The transition from TECHNIQUE to PLAN can be likened to the difference between having work for one day or having a fulltime job; like having a fish or learning how to fish, etc. it is a very big transition in the evolution of ones game - and one that should be understood. Eventually, over time, we develop different plans for different situations; ideally, for every situation (again, this takes time) and over even more time, those plans each become more clearly defined and can be executed with increasingly greater levels of skill.
For those who are just beginning to make such a transition - start building your first plan around the situation that comes up the most when you wrestle. Then, over time, build other plans, for other common situations that occur; eventually, having a plan for every situation. Then you are living in what is known as - a familiar landscape.
JBW
Email Post

Anonymous said…
OMG, you explained that so well. I had eight years in martial arts (one black belt) prior to training in BJJ. For the first 18 months, I absorbed everything organically. Then all my game development strategies started to kick in, from all my previous martial arts training. I started developing my chess game, so to speak. It's much like you described. I try to develop ways to flow from one situation to another. I haven't focused on submissions for six months. I'm just working the sweeps and transitions, trying to get to dominate positions. I want to build a solid foundation before I start working submissions again. That's not to say that if a submission comes up that I won't try for it, it's just not my focus right now. I'm glad you wrote this post. It has helped me to refocus on my agenda. Thank You!
2:14 am

JBW said…
It sounds like you're on the right track. Nice. Remember: just do it by siege tactics, learn to connect one position at a time. Eventually your game will emerge. Best wishes
JBW
7:49 am

Roger Gilbert said…
At the back of my mind I could see an outline of where a blue might connect to purple, but could only think in terms of "implementing techniques" in some sort of order. However, your short comment of what the objectives of being a blue belt includes gives me sharper focus - something I was missing. Many thanks. Roger
8:21 pm

Tony Terranova said…
Nice blog John and it neatly applies to all forms of martial arts. When I teach stand up I always remind my students of 3 things that all have an ultimate impact on their ability to progress. These are: (a) every technique starts and ends in your correct stance (b) never sacrifice your balance for a power strike and (c) learn your combinations and hard wire them in the brain beofore you even begin to start hit heavy. Keep up the good work look forward to seeing you in April in sunny UK. Your friend Tony. T
9:48 pm