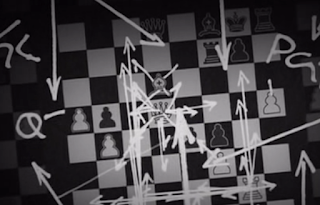 The number of opening moves in a game of chess is 20. Of course, the number of ways in which your opponent can respond to your first move is the same number – 20; but after that, things get tricky. In fact, the number of different possible games of chess (the way in which it could unfold from beginning to end) is greater than the number of protons in the universe. Seriously. That is a large number!
It is easy to see the game of chess as a metaphor for life – the different pieces on the board can be thought of as representations of the different elements and forces at work in our lives – different situations require that we make different choices – favorable outcomes depend on good choices – sometimes we need to sacrifice something to gain something, etc.
BJJ has been likened to Chess – most often because it is similarly complex and you only need a little experience to be able to trounce someone who has no experience. BJJ though, is also like chess in that the goal is to restrict your opponent’s movements whilst giving ourselves the most options for movement (attack). All this is very obvious – but here is something that some of you may not have thought of – when you play chess (for those who don’t know the game) the object is to checkmate (kill the opponents king) – but in the actual playing of chess, the game comes to a conclusion the move before we actually take/kill the opponents king. In other words, we don’t need to grab their king and remove it from the board to have won the game – and in BJJ, we shouldn’t need to apply a submission to the point of pain before the opponent concedes defeat and we take the tap. If we think like this – and roll like this – we will have far less injuries on the mat.
JBW
Email Post

Really interesting post. As it happens, I have my first lesson tomorrow morning and am really looking forward to it, somewhat apprehensive too. The chess analogy certainly helps!

glowflyer said…
Hi John, attended your seminar last w.e. It was excellent. You made some cool analogies to chess, bjj, possible outcomes and no. of protons in the universe. Interesting. The thought popped into my mind that according to current science the universe is still expanding and has been since the concept of the big bang. It is in a constant state of change. Would love to know your thoughts on whether bjj is evolving (with new techniques etc) providing more poss outcomes? Thanks again for the seminar, awesome.
4:31 pm