Getting beat up and not knowing it .. 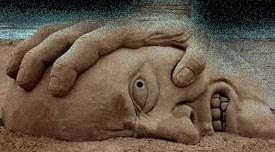 I took up martial arts when I was a youngster, as a way of trying to quell the insistent voice of fear that murmured inside me … after having been beaten up a couple times, as a young kind, I began my quest for super-powers. Fear can be a powerful motivator – the more scared I became, I more I would over-compensate. I was pulled off the unconscious body of the biggest bully in school on more than one occasion. Yikes!
There is though, a much more insidious threat that I didn’t perceive until much later in my life. And my response to that new threat – I beat the crap out of it!
When we are beaten on the mat (or on the street) we at least know it … the much worse beating to take is the one we don’t even perceive; the soft beating; the beating we take day after day without even realizing it.
People are beaten down by the way they live their lives; by advertising, by the foods they consume, by the conversations they have, by the habits they acquire, by the work they do … and all the time, they think ‘that’s just the way it is’.
I have always rebelled – and have been punished for it. But I won’t be beaten down! Never.
JBW
Email Post

Also, the reverse application of this is true is it not? Sometimes the best way to resolve a conflict is in a way the other person/s are not aware of. No way for them to fight back then.
1:08 pm

SenseiMattKlein said…
Believe TV plays a big part in the beating down. The ads try to make you feel inadequate if you don't buy their products, the Jones' have this why don't you? How often do you see healthy foods on TV? It is always junk food, especially late at night when you're hungry and tempted. Given up the tube and never looked back. It is poison for the mind.
9:49 pm