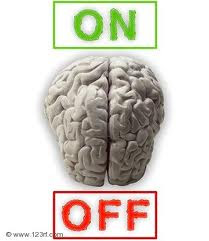 Switching on – is the opposite to sleeping – but those are just the extremes on the bell-curve – there is a lot of grey area in between. Some of the in-between states are what we experience when we are daydreaming, awake but non-attentive, bored, etc.
Being switched on is about being in a state of high arousal; being acutely aware ; having our attention turned up to full volume. We can be switched on and highly focused, with our attention tuned almost exclusively to one thing that we are concentrating on – or we can be switched on and very broadly focused, taking in as much information from our environment as is possible.
Switching on while we are training has obvious benefits – in fact, I think that is one of the reasons many of us are attracted to ‘action-based sports’ – we need to switch on so that we aren’t injured or killed – and we like the feeling – the feeling of being fully switched on. You don’t ski down the steep side of a mountain in a state of boredom – you are fully switched on – fully invested in the moment – fully alive. The same goes for fighting – fully switched on – fully alive and completely in the moment.
If we experience being switched on in one facet of our lives, we can try replicating that ‘state’ of being while we are experiencing other facets of our lives. I have taken the feeling of being switched on – on the mat – off the mat and into other areas of my life. This is a skill I am glad I have developed – to whatever small degree that I have.
JBW
Email Post

Roger Gilbert said…
Hi John. That's a most interesting observation! I found, when I was riding 10,000km per year on my 1200cc motorbike around Europe that I was most vulnerable to accidents on long journeys when I was traveling under 110km/hour! Above that I was fully focused and engaged and aware of everything going on around me. Traveling in traffic at low speed resulted in me being distracted, thinking of unrelated things and paying less attention to what I was doing - and hence increasing my chances of getting things wrong (which on occasion happened). I've know there is a 'switch on' point, but haven't thought of it in terms of what happens on the mat. I will be exploring that from now on! Thanks for connecting the dots for me.
7:07 pm

Inspector Clouseau said…
Nice blog work. I came across your blog while “blog surfing” using the Next Blog button on the blue Nav Bar located at the top of my blogger.com site. I frequently just travel around looking for other blogs which exist on the Internet, and the various, creative ways in which people express themselves. Thanks for sharing.
12:55 am