WHY DO FIT PEOPLE NEED TO TRAIN SO HARD? 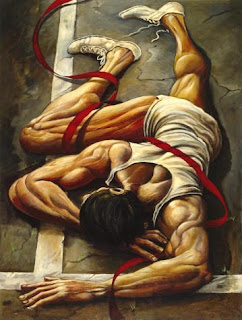 That’s how they became fit people. Why do millionaires need to be so frugal – that’s how they became millionaires. Why do good fighters need to work defence? That’s how they became good fighters.
It’s all about a mixture of the right ingredients.
Physical fitness is about not only doing sufficient exercise, but it’s about eating the right foods and getting enough rest so the body can do the repair work. My preference is a high intensity-style of workout, coupled with my martial arts training – eating good quality smallish meals, usually four times a day and resting in between.
Financial fitness is about setting up more than one stream of income and then making sure to spend way less than what I make. It’s not so much about the amount of money we make, but how much we tend to accumulate, that ultimately determines whether we are financially healthy or not.
Fighting fitness is about training in the variety of skill sets that best prepare us to be comfortable across a range of scenarios. This includes pre-fight strategies, kickboxing skills, takedown skills and ground skills – then there are those skills that deal with edged weapon attacks, multiple assailant scenarios and the like. There is no room for boredom on this landscape.
So why are millionaires so frugal - because that’s how they became millionaires. Why do great martial artists need to train so much … etc? Kind of obvious isn’t it?
JBW
Email Post

Matt Klein said…
Really had a great time at your seminar yesterday. Left very fired up about my next training session.

This is a great post. So many people live their lives trying to keep up with the Jones's. To me wealth is learning to enjoy what you have and especially what you spend your waking hours doing. Spending less than you make is a big part of that.

I share your philosophy about eating right and getting plenty of rest.
5:36 pm

Liam H Wandi said…
Thank you for this post John. I was having thoughts about money yesterday and I must admit you struck a nerve there :)
4:53 pm

JBW said…
PTG: Seriously, listen to me, it's hardly at all about how much money you make - it's about how much you accumulate. I know people who earn 300K+ a year - and they have nothing but debt, due to lifestyle choices .. I also know people who earn $60K a year - and are now millionaires. Lifestyle and spending habits have a huge impact on us over time - especially over 10-15 years. Save 15% of everything you earn - and learn to live off the remainder. Do it. becoming a millionaire is easy if you follow that rule for 15 years.
Warmest wishes
JBW
5:00 pm

EmmaD said…
Hello stranger ,
Thats so spot on ...
I'm always inspired by your words, thoughts n actions , and so Miss Training , I Will be in this week to find out times classes etc for myself and my daughter(8yrs) Carnt wait to get back into it .
Regards
Emma Delladio
1:05 am

JBW said…
Emma
I shall look forward to seeing you on the mat. Nice!
Small decisions can make huge differences in our lives.
Best wishes to you
John
8:31 am