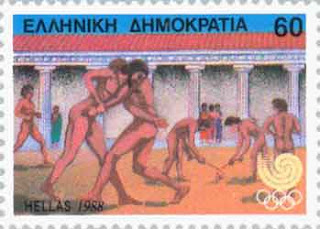 The Palaestra was the ancient Greek fight gym. It was a place where athletes studied and trained in combative disciplines - nowadays, with the advent and uptake of BJJ and MMA training, we are seeing a resurgence of this ancient idea.
The Palaestra, was indeed a proving-ground for grappling and other combative disciplines – but it was also considered a place of learning – and academic approach to fighting.
The Palaestra was a place where the ancient European youth would go to take the physical part of their classical education. The Palaestra was afforded considerable status in the ancient world – all manner of teachers and their pupils could be found spending time there. The historical figure – Plato – even held some of his philosophical discourses in a Palaestra.
The Paleastra of today – the Neo Palaestra is an interesting concept. My own approach to training the combative athlete is to give him (or her) well-rounded instruction, not only in the techniques and principles of fighting but in the application of those principles in the wider aspects of their lives. The Neo Palaestra should, in my view, be a place of study, a place of deep learning, of self-discovery, of becoming …
JBW
Email Post

George Adams said…
You are definitely are Greek, John.
3:48 pm