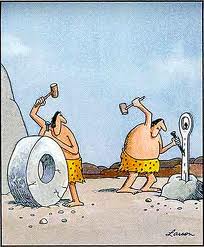 Anyone who had spent considerable time on the mat has probably put his or her own ‘stamp’ on a particular technique or range of techniques. Going even further, perhaps you have further developed a technique – ie: taken a tried and true technique and ‘developed’ it – expanding on the number of ways in which it can be ‘set-up’ – or coming up with new ways in which to capitalize on an opponent’s reaction to the technique. This ‘development’ is happening all the time in BJJ – that’s what makes it a ‘live’ art – and evolving one.
Now beyond these approaches (‘personal stamp’ & ‘development) we have ‘invention’. Inventing a totally ‘novel’ technique from scratch is a very satisfying experience. If the newly invented technique survives the pressure-testing environment of the mat, the technique might gain momentum and spread like a virus. It may also remain pretty much confined to that mat if it isn’t unloosed (successfully) in the competition arena. In either case – there is a lot of satisfaction to be had in it’s birth and subsequent development.
So whether you are putting your own stamp on an old technique, or further developing some current technique or coming up with something completely novel, keep up the good work – this is what makes BJJ so fun to learn and study.
JBW
Email Post