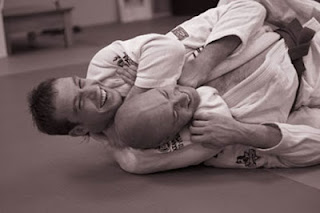 Rolling ... this thing we all love - comes in many varieties.
There is competitive grappling (as in the competition arena) - there is the more friendly version that takes place on most mats (on most nights) wherein we get to 'pressure test' new ideas and newly acquired skills - then there is 'creative and light rolling' where the goal is to try the totally new, to turn left where we would normally turn right - to experiment and have lots of fun doing so. My instructors - the Machado brothers - call this 'playing Jiu Jitsu'.
When we invest in 'playing' - as children seem to do so without effort - we literally change the chemistry in our brain. We try novel ideas, we are less bound by convention, we invent, we create, we explore. Lots of novel ideas inevitably lead to 'dead ends' - meaning they don't have enough 'survival value' to take root in the 'pressure testing' world - but every now and then, one makes it through the rigour of the pressure test and takes root in the real world. This is how new things come to be. Most of the techniques we all enjoy in mainstream BJJ sparang from a seed that was formed in 'playful rolling' phase of Jiu Jitsu training.
Aas Rigan and Jean Jacques Machado used to say - BJJ is 90% play - 10% fight. Play today ...

Unknown said…
Beautiful.My goal on the mat exactly. Thanks for that.
6:03 pm