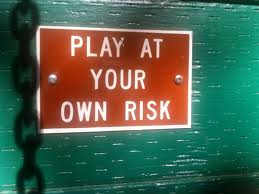 For the larger part of our lives, society tells us to 'play it safe' ... I guess this is really hardwired i to our genetic make-up; after all, most of our ancestors would have had to play it safe, in order to live long enough to procreate ... otherwise we more than likely wouldn't even be here. We all come from a long line of 'play is safers' ... so it's no wonder we tend toward the same sort of behaviour.
But playing it safe, isn't always how great things are achieved.
One of my students competed in a national BJJ competition last week - he lost to the eventual winner of the blue belt division - even though he was winning the match; he lost because he went for a pretty 'radical' attack at a point in the fight when he was clearly dominating - in other words, he took an unnecessary risk. For him, it didn't pan out, and he paid a price for it - he lost the match. But in my view, I consider him a 'real winner'. He took a risk - he demonstrated (by his risky behaviour) that he was willing to make a departure from the 'surer path' to try something that (if it had worked) would have been pretty spectacular. I just love that ... and think about it; what, if any, price did he really pay for his willingness to play it unsafe? Awesome.
JBW
Email Post