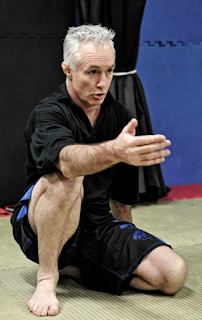 Often at the end of a seminar, I'll spare a little block of time for questions. People ask all kinds of questions ... sometimes about specific problems they are having on the mat, sometimes about training concepts or approaches to training, sometimes about life, living with purpose, overcoming dramas ... but one I have been asked more than one time this past week is this ... " where do I see BJJ going in the next five to ten years?"

An interesting question ... and one I have an opinion on. Twenty five years ago, BJJ was just BJJ ... a highly evolved, super effective, fighting art, at one both elegant in it's simplicity and addictive in it's complexity. Now though, a quarter of a century later, I see it moving forward in a number of different ways.

My feeling is that all BJJ Black Belts should have some understanding of each of these very different approaches - BJJ for self defence - BJJ for competition - BJJ for MMA - BJJ for life. Depending on where the instructor places the emphasis, each of these approaches can produce very different outcomes ...  none is more or less important than the others ... they are just different ... and I think that as time goes on, different instructors will become increasingly clearer on where their particular focus lies. BJJ for all seasons ... JBW
Email Post