Inertia is the Enemy ... 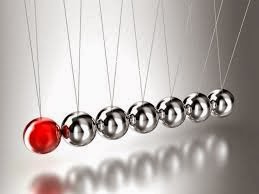 Inertia - is like quicksand to the living of our lives … and ‘getting going’ - taking that first small step - can often be the most difficult step in a large - even complicated process. Over the years, in talking to many hundreds of people at the very beginning of their martial arts practise, I have learned that in most cases, they have pondered for many months, sometimes, even years, before something kicked them into a state of action and they came to my school and actually began their training. We tend to plan for and ponder on things a long time before we take action - if in fact, we ever do. It seems a part of human nature to consider, consider some more, weigh up the reasons for and against taking action … ponder further, consult with others, over-consult … and then ‘sleep on it’ … before we pull the trigger. I think tendency is what holds so many of us back from doing the things we want to do and achieving the things we would like to achieve. I know a few people who don’t seem more intelligent than everyone else - in fact, in some cases, they seem less intelligent (in the way we tend to measure such things) - but they achieve a great deal. I know many highly intelligent people - who measure and weigh - older and consider - and at the end of the day - don’t get anything done. There are many kinds (faces/facets) of intelligence … and I think one of them is the ability to ‘take action’ or pull the trigger. This trait can make all the difference in survival situations - but also it can make a difference in how early you buy that house, commit to that girl (or guy), start on that fitness regime, etc.


So ‘swing away’ … you’ll probably ’strike out’ more than most - but you’ll also hit more ‘home runs’. Remember: Inertia is the enemy. JBW
Email Post

I have done many "big" things in my life, such as joining Peace Corps. I couldn't understand people's reactions when I joined - strangers told me "I'm proud of you" and I would wonder why.

I now realize it's because talk is cheap and actions are valuable. How many people talk about writing a book vs those who actually sit down and do it.