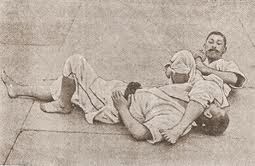 We live in an age where we not only want it all ‘NOW … but we expect to get it. Get it now, pay for it later. A far cry from the yesterday’s world, where if you wanted something, you worked, earned, saved and when you had enough, you bought. Those were times where ‘instant gratification’ was not the law of the land.
On the martial arts landscape, some of these same forces are at work. There are a lot of instructors in operation, who just haven’t done the work. You can usually identify them through their slogans - ‘we don’t believe in belts’ - ‘we’re more of an MMA school’ - we do a bit of everything’ - I’ve had a lot of instructors’ (often their reply when questioned on their lineage) - ‘we’re more about the street’ … etc.
Now there’s nothing wrong with coming up with new ideas, and trying to develop better, more streamlined and more effective approaches to training - but this usually only amounts to something, if built upon some kind of solid foundation.


As I look around, it seems that a naive indulgence of personal expression has in many places, replaced the disciplined study of fundamentals … fundamentals that would ultimately provide a foundation for ongoing development (and yes, experimentation). There is a large difference between taking shortcuts and ‘streamlining’. JBW
Email Post