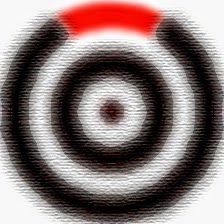 The concept of fuzzy goals has always come naturally to me. I have never been one for fixating upon a clearly defined goal. Rather, I tend to begin with a rough - fuzzy - idea of what I want or where I want to be and I begin taking small steps in that direction. By keeping my goal ‘fuzzy’ - I am forced to keep my attention on the step I am taking right now - rather than on something that doesn’t exist yet. Also, the fuzziness of my goals allows for a lot of flexibility and adaptation to circumstance. As I have made my way toward my fuzzy goals - I have very often come across an even better goal … in itself, fuzzy. I have always been about the ‘process’ - and that is where I keep my attention. When I first started bushwalking/hiking some thirty years ago - my tendency was to take a straight-ish line toward my eventual destination; and this more often than not, proved to be impractical. There were lakes, swamps, rocky ground, cliffs, etc … that stood in my way. Eventually I learned to  follow the contours, use the little animal tracks, and circumvent the obstacles. The route might have been a little longer but I would arrive where I wanted to go, much more easily and often quicker than I otherwise would have. And again, quite often, I would find something even better along the way … keep the goals fuzzy; work the process. JBW
Email Post