The ripples are not the stone ... 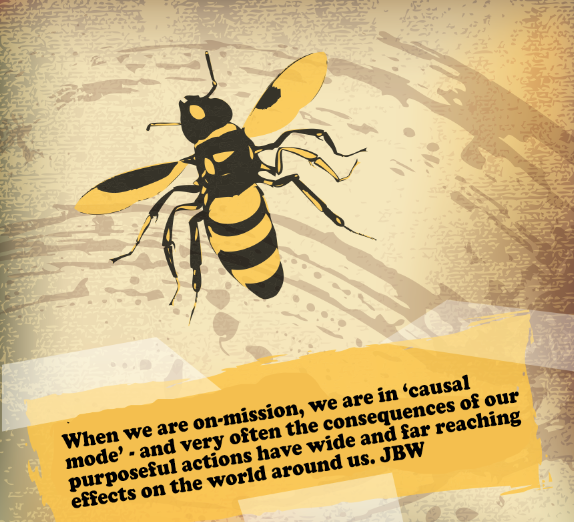 When we are ‘on mission’ - that is, moving with purpose toward a goal - there are many, many side (precessional) effects. My favourite example (from Buckminster Fuller) is the Honeybee example: the bee, in it’s pursuit of pollen, is the cause (probably unknowingly) of a hugely important side-effect that benefits the world - that is, cross-pollination of flowers - which in turn, creates more flowers - which in turn, allows the bee to collect more pollen … and so it goes. Bottom line is this: the cross-pollination effect is not the reason the bee does it’s thing - it is just a ‘side benefit’ - even though it’s importance may seem almost immeasurable.


Warren Buffet (great investor) probably doesn’t give much of a hoot about the silo’s of money he could spend if he chose to do so - that money is almost certainly, just a side-effect of him doing what he loves to do - playing the investment game. The playing of that game is what gets him up in the morning - not the money - for sure! Ignorant people can easily misunderstand what is really going on here - and point derisively at Buffet and ask ‘what’s an 80 year old guy doing obsessing about making even more money?’ That would be like asking the bee why it is obsessed with cross-pollinating flowers. The bee, if it could speak - would probably ask - flowers? What flowers? And what is this cross-pollination thing you speak of?’. Purpose-driven living has ramifications … but let’s not confuse the effects of purpose-driven living with the power of pursuit, from which they flow! The ripples are the not the falling stone ... JBW
Email Post