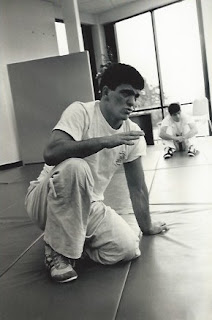 I was once asked ‘what’s in a belt?’ – I flippantly answered ‘mostly cotton’. It is though, a question worth answering with a little more consideration, as it can represent so very much, or so very little depending on the school, style, mat culture, etc. So here is my take on what it means from my particular perspective.
A Black Belt represents a certain level of excellence; a departure from mediocrity, if you like. In some ways it really only denotes a commitment to a longer and deeper journey – in other ways and for many people, it serves as a final goal-post; a marker of a journey done-and-dusted; a conclusion.
In Brazilian Jiu Jitsu, the Black Belt is referred to as Professor. The term Professor (literally: one who professes) refers to someone who openly professes a deep knowledge of his or her given subject. I don’t mind such a definition, as it goes directly to the heart of the matter – and that is, a Professor (Black Belt) should know his or her subject matter.
Knowing the subject matter, really understanding it – is the first step in being able to teach or instruct others. I doubt you could ever find a history professor who didn’t know the basic facts surrounding ‘the battle of Hastings’ or ‘the fall of the roman empire’, etc- and so we should apply the same set of standards (in my view) to the martial arts.
A BJJ professor should have some basic knowledge of a wide range of subjects, positions, guard-styles, defenses/escapes, Armbars, Kimura’s, Omoplata’s, leg attacks, takedowns, etc; if he or she doesn’t, they fall below a long-established standard.
A seventy year-old Black Belt might not have the physical dexterity, reflexes or fitness of a thirty year old, but he or she should most definitely make up for that deficit in terms of knowledge and understanding. And this again, goes to the heart of the matter – and that is ‘knowledge and understanding’.
Knowing our subject matter, as Black Belts, is something that should never be compromised; and nor is there any excuse for that to be the case. We live in a world that is replete with information; travel is easier than ever before; there are more schools to train and learn at, than ever before; the available excuses for not knowing our subject matter are fewer and fewer than ever before.
The primary task of a fledgling Black Belt is to know, deeply and fluently, his or her chosen subject matter. I call this process of learning and understanding ‘taking ownership’. A Professor (teacher) should ‘own’ their subject matter – and by this I mean they have moved through the process of ‘casual exposure’ to an idea, to ‘understanding’ it and then to finally ‘owning’ it.
A Professor should have an opinion on almost every facet of his or her chosen field – but at the same time should be open to new and ever-evolving possibilities and ideas.
I like the fact that the average journey from white belt to Black Belt in Brazilian Jiu Jitsu takes around a decade. That is just enough time, in my humble opinion, to get the ‘big picture’ of what is going on and to acquire enough understanding of the many facets of the art to be able make claim to ownership and some limited expertise.
A solid Black Belt should be have a reasonable working knowledge of many areas, and not just those areas that appeal to them personally. Learning to teach is about acquiring the ability to help others make progress and develop skills and understanding and should not be limited to just good knowledge of those areas of the game that we prefer ourselves.
A history professor may have a deep personal interest in say, the European Middle Ages – but would also have some reasonable knowledge (at least I hope this would be the case) of history in general. This is also an important part of what it means to be a Black Belt (again, in my opinion).
Naturally, (perhaps sadly), there is a natural decline in standards as time goes on. Many, many instructors are motivated largely by financial rewards and as such might find themselves handing out ranks more quickly than they would if money was not involved. My friend David Meyer (USA BJJ Black Belt) calls this ‘Belt Inflation’ – meaning that as time goes on, you get less and less for your Black Belt (dollar) than once we did.
In some ways, there are some benefits to Belt Inflation; if it keeps people training longer than they otherwise would, then it could be viewed as a good thing. At the end of the day, it is all very subjective; for myself, I shall still wake up each day and swim against the prevailing trends – I am all for ‘raising the bar’ – and building a better generation than the one that I myself emerged from. This, to me, is what real teaching is all about.
JBW
Email Post

Sridhar said…
You have such an interesting blog. Thanks for sharing. I'm a life coach blogger. Reading blogs is my hobby and I randomly found your blog. I enjoyed reading your posts. All the best for your future blogging endeavors. Please keep in touch with me in Twitter, @lifecoachbloger and Google+, +sridharchandrasekaran
3:11 pm