The Latest and Greatest ... 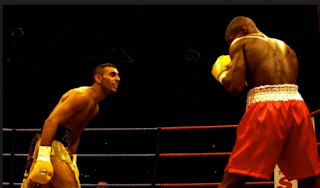 There are some out there who may remember when the highly entertaining and very talented boxer, Prince Naseem, became world champion. Naseem was a cocky fighter, to say the least, and used to fight much of the time with his hands down next to his hips, or even, behind his back. His style was based on his immense (Ali-like) skill at slipping, bobbing, weaving and using unusual angles to avoid punches. Entertaining? Yes. Fundamental boxing? Hardly.

And here is where the problem lies … not for Naseem; but for those who were starting out in boxing and were trying to emulate his methods.

Today, we have more information at our fingertips than at any other time in history. With all that Youtube and other forms of media can offer, it is difficult for the novice to keep everything in perspective. Once upon a time, when we wanted to learn Boxing, Karate, Brazilian Jiu Jitsu, TKD or Kung Fu … we had to seek out an instructor who (hopefully) would instill in us a good grounding of the fundamentals, before moving on to more advanced techniques and concepts. Now though, we can see a world champion using his favorite technique on Youtube, and make the mistake of thinking ‘well … it’s good enough for him – and he’s world champion – so it must be just what I need to do myself’. Clearly, this kind of thinking is very flawed!

The latest and greatest technique that this or that ‘champion’ has used in competition, may be the result of decades of training; it may be exactly what that champion needs to do, to counter his highly skilled opponent’s strategy – in other words – it has it’s place; but that place should in no way be confused with what is needed to create a good, workable set of basic skills.

We do have a tendency, to want to ‘get there’; a desire to ‘arrive’, to ‘achieve’ our goals. This is why it’s easy to look at those we wish to emulate and ‘do’ what they are doing; thinking that this will get us ‘there’ sooner.

The actuality is this – we also need to walk the path; we need to walk the same path that our ‘heroes’ have walked, if we want to achieve the things they have achieved. And yes, we should be able, with the right guidance, avoid some of the pitfalls that our heroes had to deal with, after all, we sometimes have the luxury of being forewarned – but we still need to ‘do the work’.

The owner of Red Corner Gym in Coventry (UK) once remarked to me, after Prince Naseem won the world title, kids were coming in to the gym fighting with their hands down by their sides. He told me more kids were getting knocked out then, that at any other time in recent history. I am sure it was a surprise to many of them; after all, their hero was fighting that way – and winning world titles no less.

What they failed to understand (those unfortunate who found themselves lying on the canvas) was that Prince Naseem has trained classic boxing for many years (with his hands held up and protecting his face) before mastering his ‘hands down’, slipping and awkward angle oriented style.

We can liken the idea to playing music perhaps, or painting, or cooking. We need to start out with a solid grounding in the fundamentals before we can legitimately and effectively let go of ‘the rules’ and take a more creative approach. There is a large difference between a monkey dabbing random strokes on a canvas and someone who has had decades of fine art experience making the transition into the abstract.

So before embarking on a mission to copy the ‘latest and greatest’ thing; perhaps we should ask, have we done enough work on the mainstream fundamentals yet. Everything has it’s place – and remember this; the race is long’.

Final thought ... Don't try to model the end result ... model the behaviour that led to that result.