The Mechanics of Luck 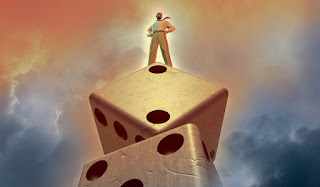 If you succeed at something, you can expect a certain element to accuse you of being lucky. Personally, I find this a little insulting; not because luck doesn’t exist, it does, in roughly equal proportion to ‘bad luck’.
I find it insulting because such people are usually the kind that are not ‘risk-takers’ themselves and just don’t appreciate the work and effort that underpins the success they view as a product of dumb luck.
Watching a martial arts movie is not the same thing as training in the martial arts. Going to school to learn about success, is not the same thing as succeeding in the actual world. Taking action is what ultimately counts; it's what drives us forward and colours the unfolding of our lives.
As the old saying goes ‘the more we prepare the luckier we get’. Or as Louis Pasteur has been quoted as saying “fortune favours the prepared mind”. Both amount to the same thing; the balance of good luck and bad luck can be swung in one direction or the other depending on the choices and actions we take.
Those who want to carve out a life of verve and adventure for themselves - those people, make their own luck. - JBW
Email Post