Heroes of the modern world 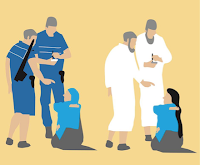 I refer here, to the women of the world; that most excellent half of the human species.

I was listening the other day to one of our female leaders bemoan how difficult it was for her to succeed in the male-dominant world of politics. She is probably correct in what she said but it made me wonder whether she has paused to consider the monstrous challenges that hundreds of millions of women in other countries are facing every day.

I refer to that vast, downtrodden population of women who live in countries/theocracies where they are subjugated; virtually enslaved, denied education, with no control over their reproductive choices and perhaps most distressingly of all, often repressed to the point where they consider such punishments to be a normal state of being.

I would (as most of us must) see women have an equal voice, equal pay, equal respect, equal opportunities as are enjoyed by most men. All who read this may mutter ‘of course’ but this is in fact, not the case throughout much of the world we live in.

I was also listening, just yesterday, to a panel of men talking about possible solutions to inequality and poverty in Australia - and it occurred to me, the solution to many of the things they were talking about might be quite simple - and it revolves around a simple notion - put a woman in charge!

Women are natural caretakers, often have a fairer hand, and are capable - given even just the slightest chance - of raising society out of poverty.

Respect where respect is deserved.