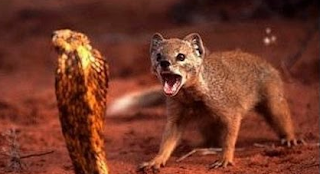 The mongoose is extraordinary in that it is resistant to snake venom. Hence it is able to win in a fight with it’s, otherwise deadly adversary, the Cobra.

The mongoose developed it’s resistance during a long co-evolutionary arms-race with the cobra. As the cobra developed n increasingly potent venue, so too did the mongoose adapt (through the process of natural selection) and develop it’s own anti-venom defences.

The mongoose could only have developed it’s defenders by sharing it’s environment with the cobra - as they both co-evolved.

On the mat, we have a similar evolutionary forces at work (albeit on a much, much faster time scale). The more techniques we ban (e.g.: IBJJF rules bans heel-hooks, Judo rules bans grabbing the legs, etc) the more susceptible we are when we do eventually face these things.

If we want to develop a resistance/defence to heel-hooks, we can only do this by allowing them in our natural/everyday environment.

A constant push toward anti-fragility is the way forward; of we want to evolve as robust martial artists.