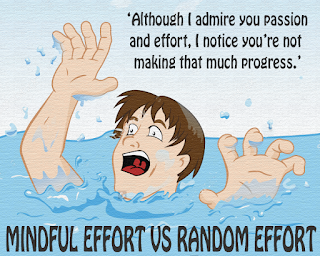 Although I admire the effort that many people put into getting what they want … I lament over how that effort might be better spent. Effort is awesome but it doesn’t necessarily equate to progress. Making progress requires mindful and purposeful effort.
Begin by gaining clarity on what you want. Then ask yourself what would it look like if you were almost there? Take note of that, for it represents your last step. Repeat the same thought experiment again and again, until you arrive back at wherever you are right now … then ignore all of those ‘more clearly defined’ steps, except the one right in front of your face. Put your intent and effort into making that single small step. The rest of the steps remain 'fuzzy' until they become the 'very next step'.
Mindful effort is the key to making progress toward the things you want to achieve. - JBW
Email Post