Ownership: A prelude to action ... 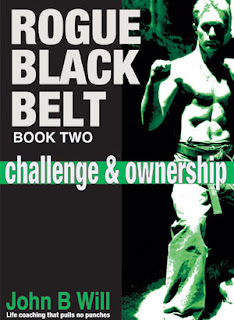 What stops people from taking action – whether it be hitting a technique in the heat of the struggle – buying that first/second/third property – clearing e-mail from inbox – distributing that new pamphlet for a budding business?

There are usually a number of factors that inhibit people from taking action (fear of consequence, uncertainty, laziness, etc) – but among the most powerful of them is that of ‘lack of ownership’.

I have talked about the concept of ownership in many of my classes. One of the things I insist upon is that participants remember the techniques that I teach one week after I have finished teaching them. This seems like an obvious and easy request but in my experience, the majority of people cannot remember or replicate what was taught to them in say, a seminar, after even a single nights sleep has come and gone.

When teaching, I try to maximise the possibility of everyone remembering what we have covered; I do so because I understand that REMEMBERING is the first step toward taking full OWNERSHIP of any form of knowledge. WE need to bring new knowledge into our minds in the kind of way that allows us to DO SOMETHING WITH IT at a later date. One of the first things we need to do is to make a clear distinction between ACCESS TO INFORMATION and the OWNING of it.

We live in a world where oral traditions are rapidly becoming a relic of the past. Many would argue the need for holding information in our headspace, when we can easily access it on the internet, in books or on DVD’s? In my opinion however, these things are just tools that should be not be overly depended upon.
I feel that the reason people often fail to take decisive action is because they do not properly OWN the knowledge they have momentarily borrowed from outside sources. Once we take knowledge of a subject into our mind and have truly digested and taken ownership of it, some sort of ‘critical tipping point’ is reached and we allow ourselves to ACT.

Consider, how many people go and pay good money to learn how to make money with property investment; yet after the course is done, after they have read the books, studied the DVD’s and listed to the nicely dressed lecturer, more than 95% of them fail to take action. It is one thing to get someone’s head nodding in agreement; it is one thing to have them rep a technique a dozen times; it is one thing to fiddle around at designing a new pamphlet for a new business – but it is another thing entirely to move forward decisively with no hesitation and GET IT DONE.

What is it about us that sees our e-mail inbox overflow with already read e-mails? Personally, I really don’t get it. I have a compulsive need to have my own inbox cleared at the end of each day. I cannot abide by having things sitting there that need to be attended to. I was thinking about this last week and it occurred to me that oft times what prevents us from taking action is that we lack the necessary skill sets to get the job done right now; so we put it off until a later date (when presumably we feel we will have acquired those skill sets).

As Jiu Jitseiro’s we need to OWN our skills and not remain content to just have cursory exposure to them. This begins with practice, understanding, remembering (to the point of being able to reproduce them at a later date) and finally trying to make use of them in our practice. Understanding and Drilling are the first steps to ownership - followed closely by getting that first application under live-rolling conditions, under your belt.