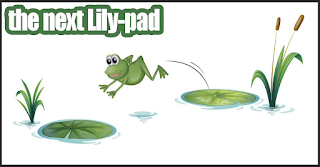 Some of us try to make educated guesses at how the future might unfold.
We aren’t very good at doing this.
Consider the share-market, at any given time, half the people are betting that the price of a share will drop (so they sell) and the other half are betting the price will go up (so they buy) … it seems to be a 50/50 proposition, even for the highly informed.

Of course, there are outliers - a small group of people - who seem to get it right, more than most. Interesting!

On the martial arts landscape, in my own lifetime, I have seen the frog jump three times.
I have seen the emergence of the ‘traditional forms of martial arts’ in the western world. I have then seen a subset emerge - wherein small groups of people have tried to pry or tease out the more ‘practical’ elements from those traditional forms, in an attempt to cobble together solutions that might be more effective in real-world scenarios. And finally, I have seen the emergence of the modern mixed martial arts movement; wherein talk and debate is put to one side, in favour of ‘testing’ our hard-held opinions through actual combat.

During this evolution, if I can call it that, I feel that disruptors and ‘the disrupted’ have both played equally important roles. The frog jumps … each lily-pad, as important as the last.
Email Post