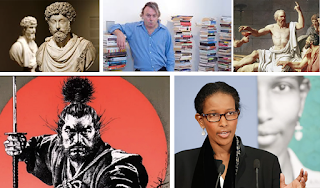 English-American intellectual, philosopher and social critic who expressed himself as an author, orator, essayist, journalist and columnist. Hitchens was the author, co-author, editor, or co-editor of over 30 books, including five collections of essays on culture, politics, and literature. A staple of public discourse, his confrontational style of debate made him both a lauded public intellectual and a controversial public figure

A Roman emperor from 161 to 180 and a Stoic philosopher. He was the last of the rulers known as the Five Good Emperors. A deep thinker who had a lot to offer on how to live meaningfully, congruently and ethically. Author of one of my favourite books: Meditations

Was a Japanese swordsman, philosopher, strategist, writer and ronin. Wrote the Book of Five Rings.