A BJJ coach, a wrestling coach and a Muay Thai coach walk into a bar … 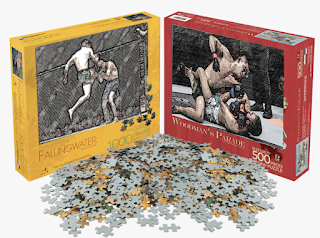 This is how it SHOULD start. Well, maybe a cafe … not a bar.
They should then sit down, and collaborate on the idea of ‘optimal integration’.

His problem is real; because his Muay thai coach knows nothing about BJJ, his wrestling coach knows nothing about Muay Thai, etc, etc. This three-coach approach represented a paradigm shift in the early MMA landscape - but the way forward, might look like something quite different. I’ve been saying this for two decades now, yet we still see the three-coach approach, dominating the landscape.

Imagine instead, a boxing or Muay Thai coach who understands that the wrestling coach wants that ‘collar tie’ - so he structures drills around shooting that jab just to the outside of the head, to establish the grip the wrestling coach needs. And that wrestling coach in turn, understands that the boxing coach may want to throw blows with the free hand before trying to secure the underhook. he also knows that ideally we want the takedown to see our athlete already in side control, rather than in the guard. And so it goes.

Integrating things, that historically have not been fully integrated, opens up new training models and developments. It’s a wonderful and fascinating jigsaw puzzle. And the front of the box, hasn’t been full painted, even yet. Get out your paint-set - lots of work to be done!
Email Post