Grappling has many faces my friends. And most countries have their version of it. India has it’s Kushti - Russia, it’s Sambo, Freestyle and Greco - Japan it’s Jiu Jitsu, Judo and Sumo, Africa it’s Senegalese Wrestling, South America the wrestling of the Xingu high plains, the folkloric styles of Cumberland, Westmoreland and Lancashire in England, Glima in Iceland and on and on. Bottom line - humans grapple! Here’s a brief, and by no means concise, comparison of Freestyle Wrestling and Jiu Jitsu. Just some initial thoughts ...

For who: wrestling is a sport that tends to attract athletic young men. Not so many wrestlers still active in their late 20’s or 30’s.

When we tremble between alternatives - we experience anxiety 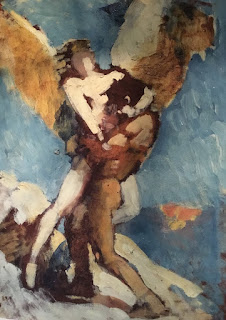 Struggle - but in the right way.