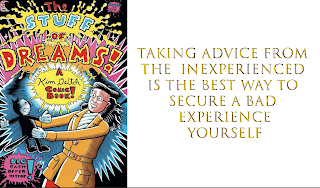 The Stuff of Dreams …

I’ve seen several video clips this week, of high profile martial artists giving ‘advice’ on how people might want to live their lives. Holy shite!!! And I know for a fact, that these particular people, haven’t done very well in the organisation and running of their own lives. Some are finding themselves at ‘retirement’ age - with no savings, unpaid mortgages, their schools have long since ‘folded’ - and yet they are espousing advice … OMG! Because they have martial arts experience, other martial artists assume that they know about other ‘stuff’. Makes me think of actors who use their platform to espouse their political views.

I’m with Ricky Gervais on that one. What the ‘bleep’ would they know???

Such people remind me of celebrate priest giving marriage counselling; or overweight doctors giving dietary and fitness advice … it is a joke; in fact, it’s worse than a joke, it’s snake-oil salesmanship at it’s finest.

Here’s my advice … only take advice about stuff from people who have done well at that ‘stuff’. Otherwise, you might just end up wasting time with what really amounts to, the ‘stuff of dreams’.