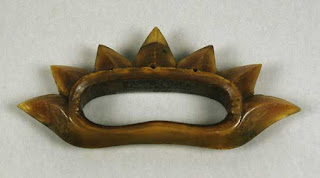 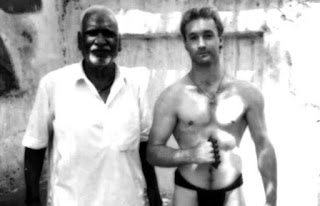 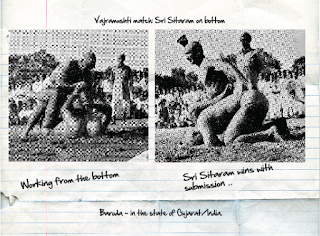 Every couple of months I receive an e-mail from India, usually from a scholar or a martial artist there who has an interest in the art called Vajramushti. I have written about this ancient art form and about the Jyesthimalla clan who practised it, on several occasions - the original article is available HERE.The Jetti's (as the Jyesthimalla family are now known) were an amazing group of people. They trace their history back nearly one thousand years; and over that time their sole occupation was professional fighting and bodyguard work, They have ben employed throughout the centuries by various kings and sultans in India as 'inner circle' bodyguards; they have also risen to high positions in various military groups and were known as exceptional athletes and teachers/trainers to the Kshatriya, India's warrior caste. The Jetti's were also well renowned for fighting with the Vajramushti, a knuckleduster worn strapped to the right hand; and they practised this art from a young age - it was their art, as far as I can ascertain, they were the only ones to develop and practise it as a family tradition.

I was fortunate in te extreme to have had an opportunity to train with some of the last practising Jyesthimalla's during a training trip to India in the 80's. Instead of a real Vajramushti (pictured here) we wore a cloth woven between the fingers of our right hands and dipped in red ochre - as a 'safer' way to train. The style was a submissionary wrestling style, with strikes being allowed. I recall one of the techniques I was taught, was an 'omoplata' (BJJ practitioners will know what I mean) from the open guard. Another was a fireman's carry after trapping the weapon-wielding arm. I remember feeling 'untalented' and 'goofy' trying to make it all work, even though my partner was only punching me slowly! But it was definitely the most fascinating martial art I had come across to that point.

Unfortunately, I trained with them before taking up BJJ so I was in no position to make technical comparisons - and I had very little ground skill to speak of (wish I had a time machine!!!) But it was amazing training and I dare say, I was probably the last person to train in that style as far as I am aware. Nowadays, a couple of old practitioners are wheeled at once a year to put on (from what I gather) a pre-rehearsed exhibition bout for the royal family of Mysore at the palace during the annual Dessera festival. Again from what I have gleaned from researching, this is a pale representation of the original practice. Who, after all, wants to embrace a form of MMA, where a knuckleduster replaces the glove? It's hard to make a living in this day and age, doing that! This is so sad for me personally; that such an amazing family is in the throes of completely losing the tradition that defined them as a people for nearly one thousand years. Who am I to feel this sadness? And why? I can't answer that - but I am! I had only a small taste of the amazing way these warriors used to live - and 'be' in the world - but it did effect me profoundly - and in many ways, drove me down the path I have walked since. So today, after two days of online research, I am inexplicably saddened. my old friend Ron O'brien, was there with me when I took on the Vajramushti training - but he has recently passed away; perhaps that is the source of my discontent. Time moves on, things fade into oblivion ... sad. Sorry folks!

Anyways ... over my reaearch of the past several days, trying to locate some surviving member of their caste who is interested in the preservation of their art (havn't found anyone as yet) - I came across this old account of the Jyesthimalla fights from James Scurry, who was in the late 1800's, a prisoner of the Sultan, Tipoo ... hope someone out their enjoys it.

“ The Jetti’s would be sent for, who always approached with their masters
at their head, and, after prostration, and making their grand salams, touching
the ground each time, they would be paired, one school against another. They
had on their right hands the wood-guamootie (vajramushti) of four steel talons,
which were fixed to each back joint of their fingers, and had a terrific
appearance when their fists were closed. Their heads were close shaved,
their bodies oiled, and they wore only a pair of short drawers. On being
matched, and the signal given from Tippu, they begin the combat, always by
throwing the flowers, which they wear round their necks, in each other’s faces ;
watching an opportunity for striking with the right hand, on which they wore
this mischievous weapon which never failed lacerating the flesh, and
drawing blood most copiously. Some pairs would close instantly, and no matter
which was under, for the gripe was the whole ; they were in general taught to suit
their holds to their opponent’s body, with every part of which, as far as concerned
them, they were well acquainted. If one got a hold against which his antagonist could
not guard, he would be the conqueror; they would frequently break each other’s legs
and arms."

Liam H Wandi said…
I read this article in Ultimate Grappling and that was the first time I heard of you John :)

Anonymous said…
I'm of Indian background and want to learn Indian martial arts very much on top of the more mainstream arts such as Kali (which i do know) Judo/BJJ and a kickboxing form. Unfortunately i have no diea how to go about this at all! I have no relations in India (my ancestors left 100-200 years ago) and all that's mentioned in my family is lathi...and not even what that encompassed.

I'm very intrested in Kalari,Silbatam and Musti Yuddah and more. But especially those 3 as they have influenced many other arts (some disputes about this but i'm sure there's much weight to the argument)like Musti Yuddah has apparently influenced Lethwei (Burmese Kickboxing)and Muay Lao, Mauy Thai and Sadal predey (Sp?.

I very much want to learn soemthing like this cause it would be fun, exotic and a experience.

But it seems many of these arts are dying or are dead...Musti Yuddah/Varanasi boxing seems so as i cannot find any information on where to train in it.

It's sad to see some martial arts die but specially in India. We can only hope that Martial arts returns to glory and national prominence. There's of course the pitfalls of "selling out" and being tampered or even destroyed by foreigners but i would very much like to do a Indian martial art ontop of Yoga!

If anyone knows any information on these sports or where tog et it pelase can you leave your email or a link.

Unknown said…
Kali is not an indian art