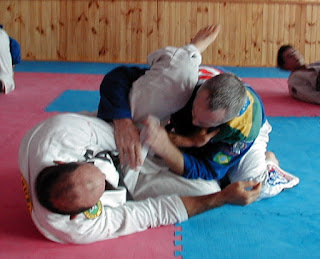 The Guard concept is one that has revolutionized groundfighting. Simply put, it gives hope and opportunity to those who have found themselves on the bottom of the fight; which, on any given mat, at any given time, amounts to about half of the class.
And although there are some occasions where being underneath is preferable (street situations where there is a big all-in brawl going on and you get protection under there and away from the chairs and bottles) – most of the time, the Guard is really our second preference – our Plan B, if you like. My advice, is go on top – and dominate, use your weight, where you have more chance to disengage and get outa there if need be. If you can’t be on top – learn some Guard skills – and so we begin in taking a look at some of the different approaches to this Art of the Guard.

Closed Guard:
Downside: The Guard you use when you don’t yet have a guard. That may be a bit harsh – but there is truth to the statement. One of the negatives of the closed guard is that ‘in and of itself’ it doesn’t do much, in the way of either defence or attack. You have to work it hard, otherwise it can be argues that it ‘holds’ the opponent securely in front of you, where he an hit you with full power. So a static closed guard – is not the friend some people think it is.
Upside: On the other hand, the closed guard prevents the opponent from controlling the upper part of your body. And it does provide a base from which many attacks and sweeps can be delivered.

Spider Guard:
Downside: This is a sports-oriented style of guard that can be difficult to make work in no-rules situations. It is technical and tricky and requires the opponent to be wearing long sleeves. It is self indulgent, in that it has evolved out of a pure BJJ environment, and it designed to thwart and frustrate BJJ players (if you can make the spider guard work, then in the real world you would probably already be controlling the fight with far simpler stuff).
Upside: The Spider Guard can be very frustrating for an experienced opponent to deal with. It is technical and tricky – and can be used to set up a wide variety of attacks and sweeps.

Half Guard:
Downside: When you have a half guard set upon your opponent, remember, this also means that he is half way past your guard! I remember learning my first half dozen half guard sweeps back in Brazil with Jean Jacques Machado in the late 80’s. (sad but true!) At that time it was considered revolutionary – but now it is becoming kind of mainstream. Remember though, at a high level, it is still considered to be a plan for making the best out of a bad situation.
Upside: The half guard is easy to establish on the unwary. You only need to snag one leg and secure the underhook. There are a plethora of sweeps/reversals you can execute from there also, it works in well with other guard styles, especially the hooking guard.

Hooks Guard:
Downside: Takes some time to develop hook ‘stickiness’. The Hooks game moves a little faster than the closed guard game for instance, and so seems a little daunting to those with less experience. It is not well suited for applying armbars and triangles chokes – common BJJ attacks.
Upside: The hooking guard can be seriously upsetting for the opponent – who has to be very careful about the way he moves or passes. It works well against aggressive people; so has loads of potential in street apps. It can open up the opponent for a wide variety of sweeps and some attacks; and can be generally used to keep him off balance. Easy to establish under pressure.

I hope some of these views help you to see the Guard in a more overall context. Remember, everything has it’s pro’s and cons – some styles, concepts or ideas have limited applications and will never fit all situations. We need to be conversant with a variety of strategies once we have or foundations in place. It is good to take time with one Guard style at a time, and immerse ourselves in it until we peak with our performance – but then it is time to let go, and get onto something else. Become well rounded – this is important for Jiu Jitsu – and important for life.