In the Hole Training ... 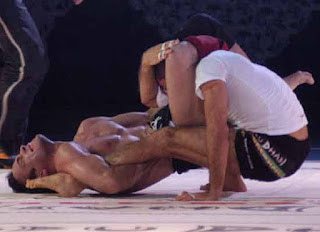 When it comes to the mat, the class can be divided into the 'better half' and the 'not so better half' ; the second group will almost always be dominated by the first. So left to their own devices, the same outcomes usually occur. Unless we change the circumstances with certain training strategies. One of the ones I really find to be effective is what I call 'IN THE HOLE' training.

- Divide the class into groups of three.
- One goes into 'bad position'; say, underneath side control (cross-side for Americans/side mount for ignorant commentators_
- Set the timer for two, three or four minutes (your choice)
- The bottom guy has to escape whilst the top guy has to keep him there
- if the bottom guy escapes, the other top guy controls him, and so it goes, with the two top guys continually taking turns to control the bottom guy until the time runs out.
- then cycle through the same process with the other two people, each having their turn 'in the hole'.

This very simple idea makes it as hard a session for the best guys in the class as it does for the least experienced. The other nice thing, is the the least experienced get to experience 'good position' on people who would normally (left to the Darwinian forces on the mat) be controlling/dominating them. Working out of 'worst case scenario' position is great for building fortitude, mental toughness, etc. It also establishes a clearer understanding of the kind of serious probelms we really need to avoid.

Some hints for those on the bottom:
- look for small victories not big ones; try to make little spaces first
- acknowledge (to yourself) when you make those small victories, no matter even if they are only inches at a time
- start by moving what you can, not what you want
- don't become over-focussed on the bits of you that cannot move
- annoy your way out

To take it to another level, now that you have spent some time working out from Worst case Scenario positions - you can begin with it not being so bad. Ie: having your hands in 'good position' whilst opponent holds you - and notice how much easier and better that is!
The back the opponent out even more - starting from where he is only half controlling you - continue this process until the opponent is all the way back into your guard.
By doing this, you have a clear understanding of all the 'levels of bad' - of how small changes in position can make for big changes in how easy or difficult it is to escape.
When people start out with BJJ - it's all too black and white - ie: they are either okay, or completely controlled - the truth is, that there are a myriad of shades (degrees of good or bad) in between. An understanding of that makes for much better defence. And 'In the Hole' training, makes us more aware of this.

All the best with it - it's a great way to start the year.
train smart - train safe!
JBW
Email Post