Be Engaged in the Process – the REAL Secret! 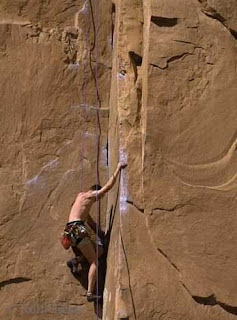 There’s a load of talk lately about ‘The Law of Attraction’; talk that suggests if we think the right way, then all the good stuff will just begin to manifest in our lives. Well, if only it were that easy; the millions of starving could just think about food and their troubles would be over! Think all you want – but be prepared to ‘take action’ also – because without action, nothing amazing will ever happen.

Many years ago, my friend Paul and I decided to give rock-climbing a go. So we set about reading all the mags in an effort to figure out who Australia’s top climber was at the time. Eventually, we settled on Malcolm Matheson, an amazing climber who was living at Natimuk in Victoria at the time. After a few calls, we tracked him down, and asked if he could teach us for a week. The deal was done, and in due course we found ourselves down at Mount Arapiles, Australia’s premiers climbing locale, toting a pile of gear and following Malcolm to the foot of our first climb.

So there we were; day one; at the base of a 300 foot climb. Technically, it was a super-easy climb; with giant foot-holds you could park a gumboot in. Easy stuff yes; but way, way high. I suggested to Malcolm, that we should perhaps start on something a little less daunting, and get the basics down, before we go up so high. He laughed off my suggestion, and replied “I just want to see if you can get four or five foot off the ground” – suddenly, I felt stupid and thought better of making suggestions about climbing to Australia’s best climber. I easily ran up the required four or five foot (any five year old could have done it), stopped and said ‘Yep, no problem” – when Malcolm replied, “Well then, just repeat!” it wasn’t long before we were all at the top of that very scary first climb – and the lesson I learned that day has rung true ever since. Don’t focus on the end result – focus on what’s right in front of you; focus on the process!

Goals are great to have – but I have never truly focussed on them. I am a process-driven person; and have found that by being true to the process, by being fully engaged in the process, something will occur – the goal will manifest!

Sure, hang the poster of that new car, that new house or copy of that million dollar cheque up on your wall; but it will do nothing other than give the spiders somewhere to set up house. It can help to be clear about your goals – but then what you really need to do is to reverse engineer a series of steps that lead backward from that goal to right where you are RIGHT NOW! And then, now here’s the really important part, TOTALLY FOCUS on the very next step – the one RIGHT IN FRONT OF YOU!

The most important two rungs on any ladder are the one you are standing on and the one you are about to step on to – that’s it! The top of the ladder has nothing to do with it. Focus on the where you are right now and the very next step you need to take. This is the secret to overcoming inertia. And inertia is what holds us all back as human beings. As Robert Kiyosaki, author of the Rich Dad, Poor Dad series, once said to me “The thing that keeps the masses in a state of mediocrity is the attitude of Good Enough to Get By.” People seem reluctant, even unable to break free of their tendency to Not Move Forward. Given that is the case, it is of much interest to me as a teacher, to find ways to get people to overcome these tendencies. Identifying and focussing on the very next step, is one of the secret keys to overcoming this common state. Process is everything.

This concept of being fully engaged in the process as opposed to focussing on the end-goal, works the same whether the goal or large or small. Being fully engaged in the task at hand is a natural state for the truly alive human being; it is what we have been genetically hardwired to do for millennia. Sadly, this most basic of human abilities, has been diluted and diminished by the day to day drudgery of modern life and 21st century living. Put yourself out in the wilds for a week, as part of the food chain, and most would be amazed at how quickly it all comes back. When you are crossing a river at the top-end, and there are crocs nearby, it’s amazing at how ‘fully engaged’ you become, at the task at hand. We have been this way, for a long, long, time. But today’s self-help section at Border’s is awash with books that talk about Goal Setting and Making it, etc. I know for one, I am just not hardwired that way.

All this is not new – as the old Chinese proverb goes; ‘A journey of a thousand miles begins with a single step!’ And that step, is ultimately, all that really counts.
Be engaged – be fully engaged!