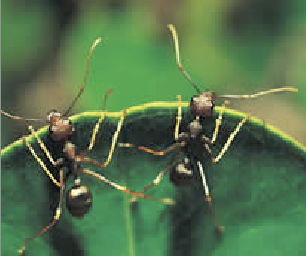 Having just been in Las Vegas at the Martial Arts Instructors Association convention, I made some interesting observations concerning the opposing concepts of competition and cooperation. The martial arts industry, like most industries I guess, can be a highly competitive one. But I have realised that different people, depending on where they are in their lives and depending on their values and attitudes, have quite different approaches to business and the relationship that that has with friendship.
I have noticed that the most successful people, who are often the ones that seem the happiest and at most ease with themselves, also tend to be highly cooperative people. That is, they don’t seem to look upon peers within their own industry, even people selling the same products as they are, as competitors. Instead of shying away from others that are selling the same service as they are, highly successful people seem much more happy to cooperate and seek out win-win relationships. In fact, the most successful people seem to be overly-generous and giving when it comes to financial stuff, than do less successful people. Those that are less successful seem to more often than not, view others that are selling or providing the same services as themselves,, as competition. They avoid talking or engaging with their peers, too caught up in trying to corner their ‘due share’ of the market. This is not abundant thinking and in my view, holds them back from being as successful as those who adopt a cooperative and sharing attitude. I find myself being more and more drawn to people that live by a creed of cooperation rather than a creed of competition. Win-win situations seem to be abundant at every turn – it’s almost as if the universe wants us to act that way.
It seems also that the martial arts industry is becoming more and more polarised; with the highly competitive at one end of the spectrum and the highly cooperative at the other. I find the atmosphere and vibe on the cooperative side to be much more relaxed and friendly, making it a much more fun place to be. I have been at the other end myself – and I am not going back.
Case in point: this very morning I received an e-mail from Geoff Thompson in the UK, congratulating me on a few things I have done of late. He also is constantly encouraging me to get going and move forward on a book I am currently writing – offering to promote it and help me market it in his own marketplace. Wow – that is so nice. In return, I find myself telling everyone that will listen, that they should go buy his stuff. The relationship we have is totally cooperative. Neither of us is concerned about cornering our ‘share of the market’. As long as we both continue to genuinely have the others best interest at heart, it seems that we move from strength to strength. This is extraordinarily rewarding. I have also seen, many examples that have gone in the other direction; people calling each other friends, and when money comes into the equation – an air of competition and jealousy creeps in. This can be extremely corrosive.
Cooperative and win-win relationships are sustainable, highly rewarding, fun and a pleasure to be in. The martial arts industry can benefit tremendously from this kind of thinking.
JBW
Email Post