Book one: fear & the engine 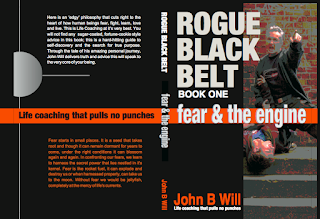 A bit of hard work over the past few days has seen me finish the first of my autobiographical/self realization trilogy. With cover art done, and 200 pages finished, I am just waiting to have it proof-read before I go to the printer. I'll wait till the nationals are over before I get going with number two. Thanks to all those who have e-mailed me with encouragement. I am excited about having it out there. My friend in the UK, Geoff Thompson, has written a fantastic foreward. All will be revealed shortly. here is the front and back cover of 'fear & the engine'. And an excerpt from chapter 17 ... I hope it whet's your appetite.
Best wishes,
JBW

Sometimes we turn left, sometimes we turn right; our decisions direct our lives, down one path as opposed to another. Often what drives these decisions is a gut-feeling or an instinct. But these things in themselves are more often than not the result of our awareness taking in and weighing up the infinite stream of information provided by our environment. The better we are at noticing, the better our instincts become. The better our instincts become, the more able we become to make good decisions.

A few days later, I was just leaving the Gajamadah market on the main street in Denpasar when a mocking voice called ‘orang asin’ – ‘foreigner’. I turned and saw several Javanese leaning against the low concrete wall that sided the bridge that spanned the local river/sewer. I didn’t recognize any of them; I didn’t need to. The Javanese criminal element ran in packs. Their main strengths were in surprise and numbers; pretty much the same tactic the AMPI group had used.
One of them; a leering, pocked-face prick was sitting on the low wall of the bridge, showing me his yellow teeth. He slowly ran his fingers in a cutting action across his throat, then pointed at me. I’d seen this shit before. But not days fresh after having one of my friends beheaded in his own home. Engine on!
I don’t know how many of them there were; it didn’t matter. This was a public place. They probably wouldn’t pull their weapons. The fall from the bridge to the concrete culvert/sewer below was probably about twenty five or thirty feet. The last time I saw that smiling prick, he was hovering momentarily in space, doubled over from the side-kick I sunk into his chest. His smile was gone; but he did remind me of one of those cartoon figures that kind of pause for a second or two with a weird expression before gravity does it’s thing and pulls them to their fate. I don’t know what his fate was, and I wasn’t hanging around to find out. But a ten meter fall, backwards off that bridge onto the concrete below, cannot have been that much fun. If he’s fallen into the sewer, it wouldn’t have been any better either.'
Email Post