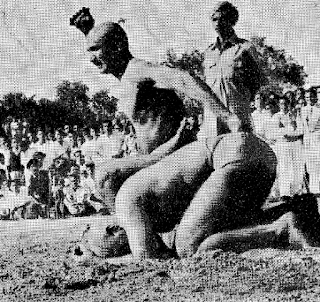 Here's a small excerpt from my next book in the ROGUE BLACK BELT series: challenge & ownership. it pertains to an event that took place in the state of Gujarat in the desert region of India. It's fresh off the press, written a few hours ago.
I hope you like it ...
JBW

"On many occasions I have been accused of being lucky. There are two types of luck at work in this universe. The luck we associate with pure chance with the roll of the dice or the whims of the gods. Then there is the type of luck that is born of smart decisions and the ability to notice things that others do not notice. The latter is the only type of luck we have any control over; the only type that I am interested in.

I had acquired in my previous visit, a very rare book from the state reference library in New Delhi. The book had no real monetary value, but as only 500 copies had ever been published, and those back in the 1960’s, it would be difficult if not impossible to come by for any who sought it. The name of the book was the Mallapurana. I have copy number 174 and have a corrupt security guard to thank for it. In my defence, I do treasure it and am convinced I have saved it from a dusty and lonely existence in an unvisited room in the bowels of the New Delhi state reference library. Enough said.
This special book, the larger part of which is written in the ancient Sanskrit language, describes an art called Vajramushti. This is an art that was once practised by a family known as the Jesthimallas. What makes this art so distinct and so very special is that it even survived at all. Vajramushti is a grappling-based art but differs from other styles in that the combatants are required to employ the use of knuckledusters during their contests. There are very few rules in the Vajramushti contest. It is a no-holds-barred affair that that at one time was declared illegal in India, because of it’s singularly brutal nature. Wrestlers would fight with knuckledusters tied to their right hands and could deliver blows to any part of the adversaries body. The contest was over, only when one fighter was rendered unconscious or gave a verbal admission of defeat.
The art is unique in that it combines grappling and striking techniques with the use of weaponry in a no-time-limit no-rules contest; a brutal art by either ancient or modern standards. I was determined to talk to someone who was at one time connected with this amazing form of combat.
I had two leads to go on. The first was the fact that I knew the Mallapurana was originally published in the city of Baroda; albeit back in the 1960’s. The second was that I knew that the members of this clan were known as the Jesthimalla, an unusual name by all accounts. Ron and I stepped off the train and onto the dry, dusty streets of Baroda with a strong sense of excitement.
At that time, the city of Baroda had more than one million inhabitants. I had the name of the family I was looking for as well as two old photos that were published in the original book. The photos of these fighters showed them to be perhaps in their late forties or so; knuckledusters strapped to their hands, competing in front of a crowd of cheering onlookers. If they were still alive, they would have to be mid to late seventies by now. I was not put off however, as I did seem to have some knack for ferreting out the things that other people seemed to difficulty in finding.
Challenge.
With Ron in tow, I went straight to the university. I walked about the university for half an hour until I found a young student that had both the time and inclination to accompany me for a day in the capacity of translator. He spoke excellent English, was intelligent and seemed fascinated that a foreigner had come to his home town in search for something he assured me did not exist. In fact, when I showed him my treasured copy of the Mallapurana, he was astounded that such a thing could ever have existed. And so we had our team.
The other thing that I had guessed at was that this Vajramushti fighting family were originally Vaishnavas; worshippers of the god Vishnu. I ascertained that this was the case because in both photos the Jesthimallas had their heads shaven excepting for the ponytails that Krishna and Vishnu worshippers usually sported. It was the only other clue I had. So I asked my translator to take me to the oldest, most renowned temple of Vishnu in the city. After an hour or so, we found our way there. The temple was old and dusty, as most everything else seemed to be in Baroda. We took off our shoes and went inside; the cool interior was a relief from the oppressive desert heat that we had been baking in for the last hour.
Upon my request, my translator asked one of the old priests if he had ever heard of the Jesthimalla family; the old man looked at me, didn’t seem to happy about the whole thing and in turn told us to go and ask at the house across the street. So out we went and knocked on the old green door of a small house not forty yards from the front of the temple. A few seconds went by before it was opened by a large man; a man in his late seventies; a man with a lot of scars on his face.
My translator made a gurgling noise and I wouldn’t be surprised if my own mouth hadn’t dropped open. There he was; the man in the photo!"
Email Post